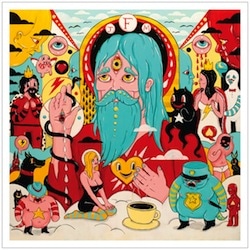 So, who is Father John Misty? A singing clergyman, discovered by Simon Cowell to provide this year’s Christmas Number 1? A previously unknown, grizzled, blind old bluesman, recently showcased on Later… with Jools Holland? The next Archbishop of Canterbury?

The answer is, unsurprisingly, none of these. Instead, Father John Misty is the latest pseudonym of Joshua Tillman, the former drummer of Fleet Foxes (you mean he’s not a real priest? Boo! Hiss! Not ‘real’! Inauthentic!). Tillman left Fleet Foxes earlier this year, and cites the Father John Misty project as his attempt to emerge from the crippling depression he felt at the time.

Tillman is not a stranger when it comes to solo projects of course. Indeed, he’s released seven albums under the name of J Tillman, but this feels like a brand new artist. For a start, it sounds a lot more confident than the understated, muttered mumblings of previous Tillman albums – his voice rings out loudly, and the sound is more reminiscent of classic mid ’70s Americana, like Gram Parsons or The Band, rather than the sometimes too minimal orchestration of his previous efforts.

Despite the fact that this was apparently written and recorded while in the grip of a debilitating depression, Tillman sounds like he’s having fun. Nancy From Now On boasts the most arresting opening line of the year so far (“Pour me another drink, punch me in the face, you can call me Nancy”), Tee Pees 1-12 is a glorious country hoe-down, and the closing Everyone Needs A Companion sees some winningly self-referential lyrics (“I never liked the name Joshua, I got tired of J”).

Although there are plenty of harmonies and sweet pastoral melodies, there aren’t that many moments which are reminiscent of Tillman’s former band (except perhaps the choral backing of O I Long To Feel Your Arms Around Me). Instead, the closest comparison is probably John Grant‘s brilliant Queen Of Denmark album – there’s a similar feeling of a hint of torment lurking beneath the radio-friendly polish.

Tillman certainly has an ear for a great lyric. I’m Writing A Novel skewers the Los Angeles lifestyle, a place of “people pretending they don’t see the actress, and the actress wishing that they could”, while opening track Fun Times In Babylon treads similar territory – “they do my face up like a corpse and say get up and dance… I would like to abuse my love, smoke everything in sight with every girl I’ve ever loved”.

Despite the prevalence of rootsy Americana throughout the album, there are a pleasing variety of styles on display. From the ghostly Fun Times In Babylon, through the chiming rock of the standout Hollywood Forever Cemetery Sings and the lush balladry of I’m Learning To Love The War, Tillman sounds perfectly at home whichever style he turns his hand to.

If Fleet Foxes, or indeed, beardy folk/roots music in general, leave you cold, then you probably won’t find much to enjoy with Father John Misty. For those that do though, there’s much to to engage on this album – in creating a pseudonym, it would appear that J Tillman has, ironically enough, discovered his own, very strong, identity.