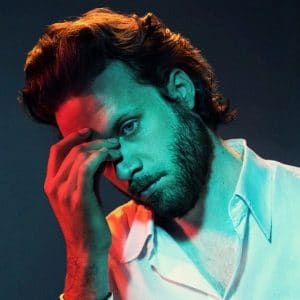 Rewind to Summer 2015: Josh Tillman – aka Father John Misty – was everywhere, having garnered near universal adulation for second album I Love You, Honeybear. It followed 2012’s Fear Fun and developed the character from a hedonistic shroom-addled Hollywood waster into a hedonistic shroom-addled Hollywood waster who had fallen in love. His live shows were pure entertainment: the sexual bombast of hip swivelling, pelvic thrusting, dramatic falls to knees, guitar throwing and mariachi bands, all delivered with a knowing wink but also moments of breathtaking sincerity.

Having “some capital to burn”, and being thoroughly disenchanted by everything around him including the US Presidential race and the rise of Trump, Tillman took himself away from Laurel Canyon to New Orleans and recorded Pure Comedy, an album about as far from the sexual bombast of Honeybear as you could get. It covered a range of topics including politics, the environment, social media, technology, fame and personal responsibility, at length, with a minimal musical palette. It was an album that divided the critics and the fans.

Barely a year has passed since that release and Tillman is back with God’s Favorite Customer. Although it was largely written before Pure Comedy even hit the shelves, its mood and style straddles that album and Honeybear. Opening track Hangout At The Gallows sees Tillman receiving a pep talk – “left foot, right foot, that’s the ticket, you’ll be back on top real soon” – before launching in to lead single Mr Tillman. A hilariously sad true story about his life on the road, in the same vein of Honeybear’s The Night Josh Tillman Came To Our Apartment, it showcases Tillman’s delightful sense of the absurd.

On Honeybear, Father John Misty was caught up in the excitement of falling in love and all the excitement, adventure and the hope that comes with it. With God’s Favorite Customer, that first flush has passed and he’s left with paralysing fear of its loss. Standout track Just Dumb Enough To Try with its piano, lush cello arrangement and lap steel guitar solo, sees Father John Misty baring his soul, admitting that he’d do anything for his wife. He sings: ”I know my way around a tune, there won’t be a single dry eye in the room”. And he’s not wrong.

Please Don’t Die starts off simply, rueing time apart as time wasted, trying to maintain a relationship over text messages sent in the lonely hours, and misinterpreted in the cold light of day. It builds into a swirl of harmonica, organ, trumpet, accordion, sleigh bells and the occasional bird tweet, with a devastating plea: “Honey, I’m worried about you, put yourself in my shoe, you’re all that I have, so please don’t die”.

Date Night and Disappointing Diamonds Are The Rarest Of Them All are both reminiscent of John Lennon with the Plastic Ono Band. Date Night is ‘classic’ Father John Misty, all humorous, egotistical, knowing, yet charming blowhard, almost direct from the Fear Fun playbook. It’s impossible to resist as he lures you back to his flock, singing “I’m the second coming, oh I’m the last to know, I didn’t get invited but I know where to go”. Disappointing Diamonds Are The Rarest Of Them All is a surprisingly honest reflection on how, in the social media age, everything is the greatest ever, yet desperately wanting to be proved wrong and be shown that his love really is the greatest. It’s a sermon of reality versus hope and as the sax rises, you know that his congregation are going to be singing this one right along with him.

The Songwriter, on the surface a simple piano ballad, posits an intriguing question to his wife: “What would it sound like, if you were the songwriter? And you made your living off of me?”. It’s clever, open, sweet, sad and sincere. As such, it’s potentially as close to the real Josh Tillman as he’ll let us get. Who knows, though? You can tie yourself up in knots trying to unravel where Father John Misty stops and Josh Tillman starts.

Having vented his spleen on Pure Comedy, Tillman has brought Father John Misty back from self-imposed exile, but that time away has allowed him to mellow, and chinks have started to appear in his armour of self protection. God’s Favorite Customer is the next chapter to Honeybear: the story of the hedonistic shroom-addled Hollywood waster who fell in love and started to grow up, even if the occasional pelvic thrust, sardonically raised eyebrow or over-dramatic fall to the floor wouldn’t go amiss.