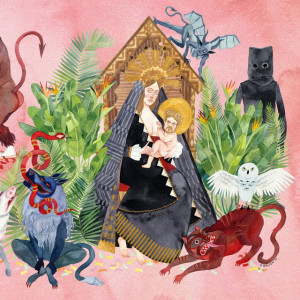 Josh Tillman’s first album under his Father John Misty moniker seemed to come somewhat out of left-field a couple of year ago, and then ended up becoming one of the biggest word-of-mouth success stories of recent times. After toiling for years with a string of solo albums under his own name, and then joining Fleet Foxes to drum on their Helplessness Blues album, nobody really expected this new identity to be his big breakthrough.

Yet Fear Fun was a absolute gem – a strange, otherworldly journey through one man’s depression that, unbelievably, still managed to be accessible, endearing and, at times, laugh out loud funny. And, if that debut was a postcard from the edge of despair, then I Love You, Honeybear is its polar opposite: Tillman’s second album was written and recorded in the afterglow of a new marriage. He’s not gone soft though: the surreal flights of fancy and hints of angst are all still present and correct, and the songs this time round are even more captivating and compelling. Listening to this record, it feels as if Father John Misty is on the verge of something big.

It makes for an intriguing companion to Fear Fun actually – while that first album’s lush melodies and throwbacks to ’70s singer/songwriters like Harry Nilsson and Gram Parsons are still prevalent, there are also some unexpected explorations into other territories: the unsettling ambient noises and skittered beats of True Affection could have come from a Thom Yorke solo experiment, while the rambunctious glam rock rhythms and wailing sirens in The Ideal Husband come as a very welcome surprise. Mostly though, the tone is downbeat and relaxed, all the better for Tillman to pull you into his weird world.

And, at times, it’s very weird indeed. Tillman’s lyrical gifts shone on Fear Fun, and he’s raised it up to another level on I Love You, Honeybear. He may be all loved up now, but that doesn’t stop him raining him all kinds of vitriol on a previous lover in the surreal, borderline disturbing The Night Josh Tillman Came To Our Apartment, which sneeringly recounts a brief liaison with a presumed groupie: “She says, like literally, music is the air she breathes, and the malaprops make me want to fucking scream” before bemoaning the “soulful affection that white girls put on, why don’t you move to the Delta?” and then ending things on a rather macabre note (“I obliged later on, when you begged me to choke you”).

It’s this unsettling edge that gives I Love You Honeybear its added depth. Almost every song has a lyrical twist that makes you sit up and take notice; the opening title track, on first hearing a simple love song about spending the day in bed with his wife (“My love you’re the one I want to watch the ship go down with”) spins off into a self-lacerating sulk about both partner’s hereditary flaws: ““I brought my mother’s depression, you’ve got your father’s scorn and wayward aunt’s schizophrenia”. It all serves to make the more sincere moments – the gorgeous closing track I Went To The Store One Day with its wide-eyed declaration of “For love to find us of all people, I never thought it’d be so simple” or the bleak philosophical musing that “no one every really knows you and life is brief” on Holy Shit – so much more affecting.

Tillman’s regular collaborator Jonathan Wilson does a masterful job on production duties, whether it be the lush, horn-assisted melodies of the soaring Chateau Lobby #4 or the beautifully yearning of When You’re Smiling And Astride Me, which recalls Van Morrison in his Tupelo Honey-era pomp. Even in a seemingly straightforward piano ballad like Bored In The USA there are some curveballs thrown – halfway through this scathing, acerbic takedown of the American Dream, some canned laughter appears each line, as if to keep Tillman just on the right side of pomposity.

It’s the sort of album that even repeated listenings can throw up a myriad of surprises: you never really get to know who the character of Father John Misty is (is he a self-hating misogynist, is he a sage or is he just a simple romantic?), but it’s clear that Josh Tillman has slowly turned into one of the most talented songwriters of our age.