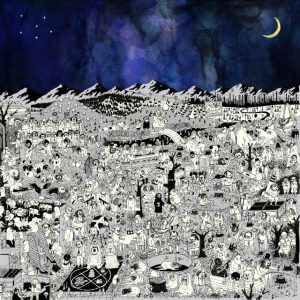 It signalled the blossoming of a captivating, distinctly modern voice, his lyrics wrapped in luxurious, easy-on-the-ear updates on Elton John and Randy Newman’s piano ballads, country crows and glam stomps. An exultant European tour quickly followed, fans lapping up his “authentically fake” live performances of total entertainment – flailing mic cords, swivelling hips, dramatic knee-drops et al – while his early evening set at Glastonbury was easily one of the best, most talked-about sets of the whole weekend. I Love You, Honeybear topped many Best of 2015 lists, including musicOMH’s, and caught the ear of Beyoncé, Lady Gaga and The Avalanches among others.

Since then, however, Father John Misty has been receiving press for often the wrong reasons. There was the excruciating early afternoon radio interview with Radcliffe & Maconie where a jaded Tillman decided he wasn’t going to play along with the hosts’ bland questioning and chummy banter, and nobody came out it with any credit. There was his much-criticised abandoning of a festival set in New Jersey, where, the day after reality star Donald Trump accepted the Republican presidential nomination, he looked out at a sea of middle-class apathy and decided the last thing he wanted to provide – and the last thing the crowd needed – was more “entertainment”. “Are we just supposed to have a chilli-off and wait for someone hilarious to say something hilarious?!” he asked incredulously, as part of a rambling extended rant.

People who had never spent any time with Father John Misty’s music suddenly had an opinion on him, while some who had dismissed it as middle-of-the-road mickey-taking. A much-shared meme positioned the famous image of Harry Nilsson looking bewildered but effortlessly cool in his dressing gown next to a black and white photo of a particularly bored, sarcastic-looking Misty clutching a calculated cigarette between his fingers, as if to say ‘even our hirsute “hipster doofuses” aren’t what they once were’. The Quietus Hour declared they had a world exclusive of a new Father John Misty song before cruelly playing the first verse of Mandy by colossally-conked cheeseball, Barry Manilow. The headline to his fascinating recent interview with The Guardian (‘I get sick pleasure out of reading about how much people hate me’) fed into the idea of him as a celebrity troll bringing it on himself, but failed to show the context of the quote, which was part of a larger point about his struggle with depression. “Sometimes making people upset or angry is indicative of pure communication happening,” Tillman said around the release of I Love You, Honeybear, but he now suggested “outrage is the new entertainment”.

In a bid to isolate himself from his vices, Father John Misty moved from Los Angeles to New Orleans to write his third album, Pure Comedy. He wanted to find an “internal silence” in order to write about his grievances with modern human life, he said, “how predictably we step on the same rake, slip on the same banana peels.” The first track lifted from Honeybear, in fact, pointed the way for the direction he would take on its follow-up: Bored In The USA was a comment on the passive reaction to the exposure of the American Dream as farce; Pure Comedy finds Misty zooming out and taking in the bigger picture.

Anyone disappointed by the relative lack of debut LP Fear Fun‘s hedonistic, shuffling indie-folk misadventures on I Love You, Honeybear, should take note: this is the sound of FJM doubling down. A more-considered version of the Misty on stage in New Jersey: the Entertainer decrying entertainment, the observer taking everything in before coming to the grim conclusion that it’s all a “demented joke”. Tillman’s old band Fleet Foxes released their Helplessness Blues in 2011; this is his Powerlessness Blues.

One of the things that made Bored In The USA so effective – aside from its gorgeous, undeniable tune and pomposity-puncturing laughter track – was the amount of drama and movement it packed into its four minutes. This template has been taken and blown up on Pure Comedy’s opening title track: Misty begins his theory on “the comedy of man” alone at the piano, before the track billows to a brilliantly melodramatic climax of saxophones, swirling strings and Misty shouting “it’s like something that a madman would conceive.” After six minutes, the music cuts out for him to deliver the final two lines a cappella: the message of come-togetherness in the last line (“each other’s all we’ve got”) undercut by the “we’re doomed!” implication in the preceding one (“I hate to say it, but…”). It’s a stunning opener, but also a draining one, and there’s still 70 minutes left to go…

Jonathan Wilson does a masterful job on production duties, while the string arrangements from Sinking Of The Titanic composer Gavin Bryars – reminiscent of Van Dyke Parks’ Song Cycle and Parks’ on Joanna Newsom’s Ys – are remarkable throughout. Unlike the rich and romantic orchestrations on Honeybear, Bryars’ strings evoke the apocalyptic sadness of the abandoned New Year’s Day sunset described at the end of Leaving LA. Electronics that first burbled to the surface on True Affection provide many tracks with a bed of melancholic static. No matter how beautiful much of Pure Comedy sounds, however, the incessantly downbeat and serious nature of the music means that time can’t help but drag over 74 minutes, and it pulls the listener down with it.

The heart sinks when Things It Would Be Helpful To Know Before The Revolution starts with a piano figure virtually identical to that of Pure Comedy, just two tracks previous – though the sorrowful strings swelling, A Day In The Life-style, to a mid-song thunderstorm are admittedly stirring. “We’re either all complicit in this purest comedy, or the people who aren’t to blame are at war with the people who are to blame until everyone is dead,” Misty wrote in the long missive about the album. Two Wildly Different Perspectives is this manmade hell set to music, with desolate strings, electric squiggles and jazzy drum fills, and is about as cheery as that sounds. Smoochie brings little to the party, other than reminding the listener that he pulled off the John Lennon vibe to far more engaging effect on stand-alone single Real Love.

Leaving LA is likely to be the tipping point for most listeners – believers will declare the drumless 13-minute centrepiece a masterpiece and Tillman a genius, while sceptics will throw in the towel in disgust. Despite a lovely strummed melody reminiscent of former bandmate Robin Pecknold and an exquisite modern classical string arrangement, Tillman quickly runs out of steam delivering a series of seemingly random musings, illusions and memories. Time appeared to stand still when he performed an interminable acoustic version of it at last month’s 6 Music Festival: just because you second guess your audience and include predicted responses like “10-verse chorusless diatribe” and “this new shit really kind of makes me want to die!” in the lyrics, doesn’t make them any less true.

Pure Comedy would have benefited from some more musical mood-lifters in the mould of Total Entertainment Forever: one of the moments Tillman had in mind when he described the album as “Ecclesiastes with more saxophone”, it is this LP’s Chateau Lobby #4, the mariachi trumpet of the later replaced by jubilant sax. It rhymes “Taylor Swift” with “Oculus Rift” and sets its themes (the numbing effect of instant gratification, the dehumanising effect of technological advances) to a jaunty, toe-tapping tune. Ballad Of The Dying Man is terrific – Tillman delivering one of his most beautiful vocal performances, backed by a pitter-pattering drum pattern and choral vocals. Those voices return, lending When The God Of Love Returns There’ll Be Hell To Price the loftiness its title deserves. So I’m Growing Old On Magic Mountain, with its wonderfully warm, droning synths, is worth every second of its 10-minute running time, while closer In Twenty Years Or So delivers – finally! – an epiphany: “It’s a miracle to be alive.”

After the success of I Love You, Honeybear, Father John Misty joked that he had “some capital to burn” and it’s true that he’s certainly earned the right to pursue his artistic vision. It’s just a shame that this only partly inspired slog isn’t a little more, well, entertaining.