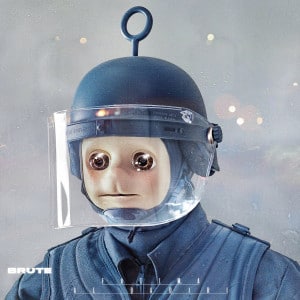 The first thing that grabs about Brute is the cover image of what appears to be a Teletubby in riot gear, gazing with dead eyes off into the middle distance. It’s symbolic for what lies within. The second album by Kuwaiti-born Fatima Al Qadiri sees her addressing the theme of authority from the perspective of a foreigner in the United States, the relationship between the police and citizens, and the hazier global picture.

As a sound artist, Al Qadiri paints with minor chord progressions, setting choice quotes from protests to create a dystopian narrative veering between rage, despair and faint glimmers of hope. It’s similar to the work of Robin Rimbaud’s Scanner in the 1990s, where he eavesdropped mobile phone conversations with a police scanner to illuminate the lack of privacy for the individual, even during their most vulnerable moments.

Brute has the ability to unnerve and unsettle to the point of creating a paranoid world for the listener, but also can lapse into incidental music that in the case of Power (minus the samples) could be plucked from Miami Vice. Take the liquid strings of Blood Moon, with its hushed ghostly chants and displaced melody creating a delicate evocation of simmering unrest. It is one of too many tracks (Aftermath, Fragmentation) that present as similar formless pieces that drift instead of acting as a counterpoint to the oppression that lets Brute down.

Endzone sets the tone of tension with it’s sample of “You are no longer peacefully assembling” via a police bullhorn. Utilizing the desensitized sounds of protest and media coverage of protests to weave a collage of unrest could be an exercise in artless commentary, but Al Qadiri makes something that is at times pertinent, affecting and haunting.

Breach is a riot of strident bass undertones, insistent percussion, with an eastern melody firmly surrounded by authoritative synth figures. Curfew’s queasy music struggles against a backdrop of sirens spiraling in and out of view, with police radios reminding that you are not alone. Likewise, 10-34 (the police code for riots) captures the juxtaposition of plaintive melody set against ghostly choirs and a murky bass figure that pervades the track, never letting you forget who’s in control. The phased neo-classical stepping of Oubliette provides some beauty amongst the brutality, before Blows comes to make its mark. Opening and closing with news footage heavily critical of police brutality, it is the theme of the album condensed.

While there is no doubting the sincerity of Al Qadiri’s work or intention in addressing the use and abuse of power, as a piece of art rather than a coherent suite of music it is a snapshot, and while snapshots capture a moment, those moments age and found sound loses its edges to become redundant.

Brute, then, is a frustrating album, one you want to admire for commentating on the weapons of mass distraction that veil who is pulling the strings, but its flaws cannot be ignored. Vague intermissions and a similarity of sounds leave a feeling that its true potential has been oppressed. Brute feels like a missed opportunity; what could have been a vital statement comes across as a hotch-potch of good intentions delivered through a smokescreen.