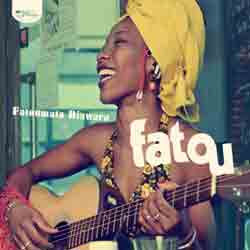 Fatoumata Diawara was born in the Ivory Coast to parents of Malian origin and currently is based in Paris. It is this background and blending of different influences and cultures that contributes to the fresh sound on Fatou, her debut album for World Circuit. Musically it is constructed from the simplest of ingredients – acoustic guitar, a sprinkling of percussion and her imposing, but never overpowering, melodious voice. It results in music that proudly respects its heritage and traditions (being informed by the indigenous Wassoulou culture and delivered in her native Bamanankan language) but equally is also forward-looking and progressive in nature.

The album’s heart is undoubtedly still in African music but there are other global strands and influences detectable within her sound. In the live arena she has recently performed with acts such as Afrocubism, Oumou Sangare and Staff Benda Bilili, all of which provide helpful points of reference for her music, although her sound has more in the way of fluidity and soulfulness. However, the album also has moments that are reminiscent of music of Caribbean origin, most notably by the much missed Andy Palacio.

The album is ushered in by the warm, understated Kanou which introduces Diawara’s gently rippling vocals and dexterous guitar playing. Sowa possesses a lovely, sun-kissed sound that is punctuated by catchy vocal inflections which result in the album’s most accessible and immediate track. Bakonoba follows, with its heady mix of bustling guitar and percussion that seems to suggest a musical parallel to the vibrancy and activity you would find on the streets of a major African city.

On Makoun Oumou her voice is used more like an additional instrument, layering sounds on top of the winding guitar lines. Kèlè and Sonkolon both possess a lilting positivity while Alama is a more pared-down effort, a singular guitar melody being supplemented by compacted vocals. The ebullient Bissa has a sashaying beat and rhythm before the pace and volume drops on Wililé, leaving the delicately conveyed vocals as the main focus.

A warm summer breeze infiltrates and snakes around much of Fatou. Some of the slower songs share the soft musical glide of Ali Farka Touré, whilst the more animated tracks touch on the vitality and energy of Orchestre Poly-Rythmo de Cotonou (another act she has supported live). The last two songs may not quite match the standards established earlier in the album but on the whole for a debut it is a remarkably assured album, varied and joyous, and brimming with promise.