Feathers – If All Here Now

by Graeme Marsh
published: 28 May 2013 in Album Reviews
Tweet 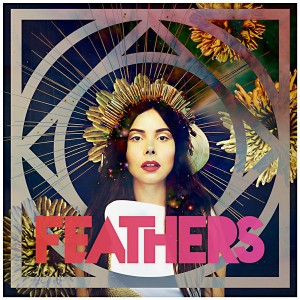 Singer/songwriter Anastasia Dimou has worked her way through a substantial number of bands (most recently Cruel Black Dove, where she felt her own input was diluted by the demands of her colleagues) before arriving at her latest project, Feathers; the all-girl quartet/sometimes quintet was formed following her relocation in 2011 from New York to Austin, Texas. The other members are Courtney Voss, Kathleen Carmichael, Destiny Montague and Alex Gehring, and together the synth pop outfit have been referred to as the ‘female Depeche Mode’, even supporting the electronic legends at the 2012 Austin festival, SXSW, after being personally selected by Martin Gore.

Unsurprisingly, Depeche Mode along with New Order are major influences, and their take on dark electropop is not too dissimilar from the path that Ladytron follow, along with a host of other similar bands, although Dimou possesses a delicate, whispery vocal that distinguishes them from their peers. The girls have popped up at various festivals on these shores over the last couple of years, including ATP in Minehead in 2012, and now seems the perfect time for them to unleash their debut album on a groomed public.

Lead single and biggest highlight of the album Land Of The Innocent initiates proceedings and the comparisons to Depeche Mode are clearly justified, the song boasting a dance floor feel with a dark tinge. The track begins with a simple four note arpeggio that remains for the majority of the duration, also being furnished with typical electronic instrumentalism – the melody is good but it is the sublime vocals of Dimou that give the song that extra appeal.

A New Order beat begins Soft which leads to another simple keyboard ditty, developing into an early Depeche Mode sound and the wispy, hushed tones of the vocals – as in many of the songs here – are given a chorus effect to enhance them beyond the norm. Dark Matter does little to alleviate the Mode comparisons with the usage of occasional industrial sounds and synth effects bubbling beneath the surface, this time the vocals taking on a dreamy appearance.

More industrial noise brings the rather bleak Night Seances into existence, sounding like someone playing hollow metallic tubes; Dimou’s vocals once again try to raise the song somewhere higher but it is evident this isn’t always going to work. Familiar So Strange is a better effort, increasing the tempo again, also benefiting from the odd Peter Hook-like bass notes as well as the swirling vocals and tinkly synths.

Fire In The Night gallops along with a pounding beat, producing another DM influenced danceable number; Believe begins with a dark feel before handclapping coupled with drum sounds produce something that borders on glam-rock territory.

The doom laden undertones of the beat in Dream Song recall Ladytron with the addition of sparsely played acoustic guitar and more subtle, echoey singing that floats above a chugging synth bass; Leaves Start Trembling walks the same vocal path but the dance aspect returns, the song sounding as if it’s being performed in an echo chamber. Album closer Welcome Possession doesn’t deviate from the formula, sounding once again like a softer Depeche Mode track.

Dimou is undoubtedly the driving force within Feathers and the band she has assembled take a worthy place alongside their contemporaries with their take on the electronic synthpop genre, with Dimou’s delicately soft tone coupling perfectly with the music to create something rather good – when the songs are right, which they often are. Although unlikely to ever achieve anything anywhere near their most clear points of reference, they have created a decent debut that may be the springboard to considerably greater success, should Dimou not suffer from cold feet once again.

More on Feathers
Feathers – If All Here Now