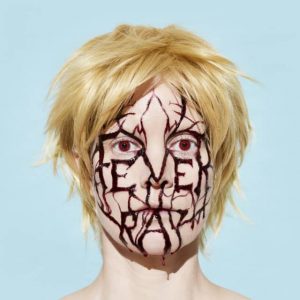 Karin Dreijer, aka Fever Ray and formerly half of Swedish brother and sister duo The Knife, is back. Last heard fronting her band’s farewell (and politically-charged) album Shaking The Habitual back in 2013, Plunge follows the Gothenburg native’s self-titled debut from 2009. While her debut continued her vocal deployment of pitch-shifted vocals which moved between keening and deep tones, creating unsettling, emotionally detached glacial soundscapes along the way, Plunge sees her emerging to even more startling effect.

Ushered in by a lone chord and a wibble of percussion, Wanna Sip’s declaration of “I wanna love you, but you’re not making it easy” marks the shift from aloof to plain sexually frustrated. Shuddering like a misfiring machine and buoyed along by a flurry of electronic squalls that erupt like a box of lit fireworks, this is Fever Ray with emphasis on the Fever. She’s got angst in her pants, and she wants to dance.

From this it should be evident that Plunge lives up to its promise of taking a step out from behind the mask to present its creator as naked and unashamed. Where there used to be glacial detachment there is now body-mapping specifics, and a gleeful, earthy engagement in sexuality that feels like liberation through exploration. Take for instance the squabbling voices littering A Part Of Us, which contains the kernel of wanting to belong, while realizing this is not easy, even if it is essential.

Motherhood and geographical isolation have contributed to her ability to look at the world through alien eyes with some detachment, horror and bewilderment before, but on this album it feels like the personal has been utterly immersed into the work, with all the doubts given heart and soul to create something utterly human and arguably more beautiful.

When the tempo drops, as on Red Trails and Mustn’t Hurry, they still exhibit slightly wonky pulsing electronica, full of imagined Eastern chords and allusions to either childbirth or the need for intimacy. In so doing they allow a sharper and welcome focus on Dreijer, the human behind the machines. Decidedly, there’s evident humour, too. While Falling is musically stark, with dark swathes of space populated by menacing chords which swoop out of the black, it gives way to the proclamation: “She’s making me feel dirty again.” To partner and contrast this follows the joyful carnival glee of IDK About You, a track that exudes an unhinged playfulness quite removed from her previous work.

Plunge, then, is an advancement of an album, one made of many moods and messages, from the politically motivated This Country to the instrumental title track that is never less than sonically and cerebrally enervating. With it Fever Ray emerges from the dark electric soup with a standalone, electro-tinged melodrama and in so doing puts further distance between her work as part of The Knife on the one hand, and her state of being in 2017 on the other. This is a joyous artistic rebirth, its creator shaking her tail feathers, pushing her own boundaries and immersed in emotion and whim brought out from within.