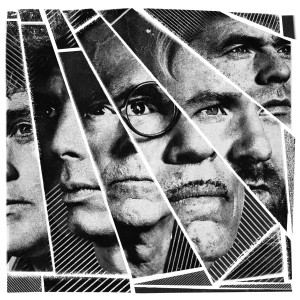 Towards the end of this debut collaboration between Franz Ferdinand and Spark there crops up a track called Collaborations Don’t Work. It’s six and a half minutes long, sounds like about four songs all being played at once, and is all about how collaborations between famous bands never work due to ego clashes. A few minutes later, the album ends with a joyous stomp and massed vocals of “Piss off, piss off, piss off!”.

By now, you’ll probably have worked out whether FFS is up your particular arty street or whether it all sounds too archly meta and self-referential for comfort. For, let’s face it, FFS will wind people up, from that all-too knowing band name, to that shared tongue-in-cheek, ironic sense of humour, and at times it does sound like the whole thing is in danger of disappearing up its own collective arse. Yet there’s an awful lot to love as well: rather like that other excellent celebrity partnership a few years ago of David Byrne and St Vincent, this is a perfect combination of two very distinctive sounds.

For Franz Ferdinand recording with Sparks SHOULD work, of course – the Scottish quartet always seemed a bit more high-brow than their contemporaries, but never in an off-putting way. Put it this way, if any of the ‘Class of 2004’ was going to record with the reigning kings of literate, knowing art-pop, it was never going to be Razorlight. Similarly, there’s always been a lot more to Sparks than their most well-known This Town Ain’t Big Enough For Both Of Us – for over 30 years now, they’ve released over 20 albums of often startling imagination and creativity. And, as if to prove that this is a match made in heaven, back in 1986, the Mael brothers released an album called Music That You Can Dance To – bringing to mind Franz Ferdinand’s stated manifesto when they first appeared of making “guitar music that girls can dance to”.

Happily too, it seems to have inspired an creative rebirth in both parties – there are songs on FFS that are amongst the best things that Alex Kapranos has written in years. Opening track Johnny Delusional swoops and glides masterfully, with Russell Mael and Kapranos swapping vocal lines like long-lost siblings, before exploding into an urgent chorus emboldened by a jittery energy that could well be both bands’ trademarks. Sometimes these songs sound more like the work of Sparks than Franz Ferdinand: for others it’s the other way round. Yet the best results come when it sounds like a brand new entity.

It helps that both bands are masters at creating characters who can tell their stories in less than five minutes. So a track like Little Man From The Suburbs is a restrained, oddly moving ballad about a non-descript nobody who becomes a notorious killer, and Dictator’s Son (the one track that really does have the Mael brothers written all over it) sees the titular character escaping the austere condition of his homeland and falling in love with the glitz and materialism of Los Angeles.

It’s also often very funny – you can’t listen to Police Encounters without a huge smile on your face, as it whizzes along without stopping for breath while spitting out lyrics like “I’ve got eyes for policemen’s wives”, and the aforementioned Collaborations Don’t Work is just hysterical – a mock-operatic epic which Freddie Mercury may have turned down for being ‘a bit much’, in which Kapranos and Mael swap good-natured insults (“I don’t need your navel gazing – I don’t get your way of phrasing”). And what’s not to love about a closing track that gives the advice to “tell everyone to piss off tonight”?

Sometimes, the archness and studied humour may be too much for some – but the delirious atmosphere of the likes of The Power Couple or the nostalgic ’80s stylings of So Desu Ne (which has the balls to rhyme Mount Fuji with “Hello Kitty Uzi”) cannot fail to charm anyone who loves the sound of a group of people having an enormous amount of fun in the studio. Collaborations may not work for everyone (hi Metallica, rest in peace Lou Reed), but this is one that certainly does. Hopefully they won’t decide to Piss Off for a while yet.