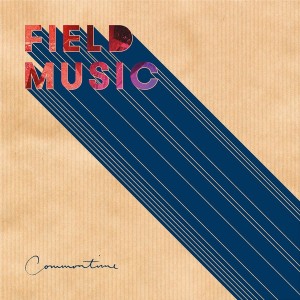 The Brewis brothers have been in the music game for over 10 years now, producing record after record of mildly eccentric characterful pop. The journey’s not been an easy one: their insistence on producing their own material, refusing to accept advances and embarking on early tours with little experience of the process brought them dangerously close to financial ruin. But the sheer tenacity they apply to Field Music has served them well and provided the record buying public with their particular blend of charming and idiosyncratic music.

That distinct singularity has meant a Mercury Prize nomination and warm critical responses, but not huge riches. Whilst you get the feeling this is okay by Peter and David, it seems incongruous in relation to the album opener and lead single Noisy Days Are Over. It’s an outright pop gem of modish rhythms, soaring strings, admissible sax riffs and an inexorable chorus. By rights it should be topping charts and dominating radio air time. In all likelihood, life being the unfair beast it invariably is, the most they can hope for is having it sung with fervour back at them on the more open-minded festival circuit.

The record’s title refers to the time signature 4/4 that classical musicians refer to as ‘common time’, and is a little in joke on the brothers part regarding their reputation as signature-obsessed proggers. However, I’m Glad is a perfect example of why they have cultivated such a reputation. It’s a tightly wound, expertly executed example of their inventive approach to rhythm, and at times it’s reminiscent of The Knack’s My Sharona, which is no bad thing. It’s songs like these that really showcase Field Music’s flair for dance friendly arrangements that share something with contemporaries Hot Chip.

The pace is racked down a notch or two towards the end of the record and we get a couple of numbers that closely echo ELO in sound and vision like the epic Trouble At The Lights and the jaunty They Want You To Remember. But the most notable of the slower tracks is the sumptuous The Morning Is Waiting For You, whose sincere sweetness is arresting. It also features wonderfully silky backing vocals from new addition Liz Corney who also takes up keyboard duties.

What makes Field Music’s songs so fulfilling is their attention to detail. That’s Close Enough For Now wouldn’t be half the track it is without all the tiny little flicks of undefinable percussion and layered vocals that sardonically disclose “That’s close enough for now/I’m sure they’ll get the point”. Equally Same Name is brought to life through small flourishes of synths, and But Not For You benefits from the punctuation of variety of random inclusions.

The band have managed to make a record that doesn’t contain a duff track. Of course that’s quite an achievement in and of itself, but some inevitably soar higher than others, and Disappointed deserves a special mention. It’s the second single to be released from the album, and its not hard to see why. It’s languid, hazy start is misleading for what swiftly transforms into an out and out catchy pop tune that is a great deal of fun.

Essentially, Commontime is business as usual for Field Music. If anything the mood is distinctly upbeat this time, perhaps as a result of both becoming parents – a necessity that new life dictates. It’s difficult to criticise a lack of change in direction when the band consistently produces records that are as engrossing and of the quality that this album is. Commontime is evidence that the musical course they have dedicated themselves to continues to offer a multitude of rich pickings.