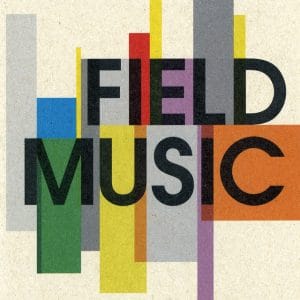 The last few years has witnessed something of an explosion in the North East of England. All of a sudden the Tyneside area seems to be a hotbed of exciting musical talent, with a series of groups making significant impressions on the mainstream.

Fist we had The Futureheads, who have gone on to become summer festival favourites with their relentlessly catchy material and a strong debut album behind them. Maxïmo Park then followed in much the same vein, with their album making the illustrious Mercury prize shortlist. And that’s not to mention the terrific Golden Virgins, who are yet to be detected by the press.

Field Music describe themselves as something of a North East Supergroup. Their drummer Peter is an ex-Futureheads stick man, and Barry Hyde from The Futureheads was in an early Field Music line-up. Not exactly proper supergroup criteria, in the sense that they’re not ageing rockers trying to prolong their careers, but we’ll let it slide. On to the music.

This eponymous debut album is an interesting listen to say the least. If you’re expecting sharp guitar riffs and obvious choruses, you’ve come to the wrong place. They may claim association with The Futureheads and Maximo Park, but Field Music sound nothing like them. They are an entirely different proposition, that, dare I say it, is a far less commercially viable one.

Their material draws obvious comparisons to The Beach Boys and The Beatles, with the classic ’60s pop feel characterising many of the 12 songs here. Xylophones, pianos, handclaps, and lots of high-pitched harmonies (ooohs, aaahs, baaahs…) can be found here in abundance, and they’re all sung in a thick Geordie accent – imagine what would have happened if Brian Wilson was born in Durham rather than Hawthorne and you’re beginning to get a rough idea what this sounds like.

However, despite this rather venerable billing, the songs here aren’t immediately catchy or particularly memorable. They’re certainly pleasant, but there’s not much that will stick in your head and have you singing along.

Opening track If Only The Moon Were Up is a case in point – what should be a joyous album opener, a statement of intent, like Wouldn’t It Be Nice, is transformed into a rather awkward piece of music. Just as you think it’s going to take off with a big hook, the song veers off in an unexpected, unremarkable direction.

Pieces, Luck Is A Fine Thing, It’s Not The Only Way To Feel Happy and Got To Get The Nerve all suffer from much the same treatment; these meander without making any real point – there’s no chorus or refrain to speak of that’ll keep you coming back for more. This may well be deliberate, but they’re certainly not doing themselves any favours.

There are some fine moments here that suggest this is not the last we’ll hear from this bunch, however. Tell Me Keep Me is full of Pet Sounds-a-like harmony that sticks to the right side of the track, the positively McCartney-esque Shorter Shorter is a little pop gem and recent single, the breezy You Can Decide, are all highpoints on what is a colourful but mixed record.

This is not so much music to rabble rouse, but a sound to fill those lazy picnics on those long summer days. It certainly won’t make them into stars – this band are destined for cult status, which is something that I’m sure they’ll be more than happy with. It’s just a shame that they haven’t directed their obvious talent towards a greater good.