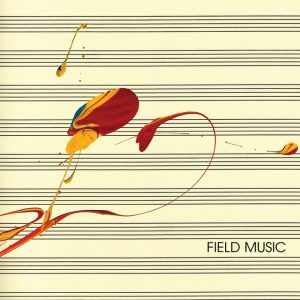 Double albums are typically the preserve of those acts which are on a creative and/or commercial high. The release of a two-disc set implies that its creators are so assured with their artistic worth that they feel wholly justified in taking up a disproportionately large amount of the listener’s time. As seasoned music fans will know, the results are variable. At best, a double album’s length feels justified, resulting in a kaleidoscopic listening experience (for example, Nick Cave & the Bad Seeds‘ Abattoir Blues/The Lyre Of Orpheus, Prince‘s Sign O’The Times). At their worst, they just feel poorly edited and, well, really long (step forward, Red Hot Chili Peppers‘ Stadium Arcadium).

Field Music are, therefore, among the most unexpected authors of a double album so far. The Sunderland band (composed of brothers David and Peter Brewis) have released two albums so far – 2005’s eponymous release and the 2007 follow-up Tones Of Town. Both were well-received critically, but since then Field Music have been on hiatus, allowing the Brewis brothers time to concentrate on their side projects: 2008 saw the release of albums by David’s side project School Of Language and by Peter’s hobby band The Week That Was. Again, both these albums were justifiably praised but it’ll come as no surprise to learn that neither set the charts on fire. The prospect of a double album from Field Music therefore remains hard to justify.

Many bands use double albums as opportunities to spread their wings and indulge in some generic experimentation across the expanded number of tracks. Hence Lindsey Buckingham’s strange but compelling dabbling in New Wave on Fleetwood Mac‘s Tusk, and the presence of deliberately throwaway tracks on The Beatles‘ ‘White Album’. A recent interview with Field Music’s David Brewis promised a similar degree of risk-taking on their new record. “All of our records in the past have been very concise, quite coherent in one way or another”, he said “so from the very start we said to each other ‘let’s do something that’s not coherent’.”

But that’s not really a true reflection of Field Music (Measure). Outright experimentation is at a premium here. Sure, Let’s Write A Book and Share The Words dabble with funk (the former via a weird double-tracked falsetto vocal) but they are, first and foremost, fully-formed songs: the experimentation extends only to the form, not the content, which remains tuneful, compelling and identifiably Field Music.

Moreover, in many ways Field Music have never sounded so focused, especially on the first disc. This may be an illusion created by the tightly-coiled, slightly aggressive nature of the music. For the most part, this is an album that rocks. The predominance of woodwind and brass on their last two albums has lent them an almost bucolic air, which drew comparisons to The Beach Boys. Here, however, orchestration is confined to only a small handful of tracks, such as demi-title track Measure, which would’ve sounded at home on The Week That Was’s album. For the most part, however, this is a record built on the dependable building blocks of guitar, bass and drums, albeit arranged and (presumably) Pro-Tooled into exciting, original new formations.

The second disc finds the band loosening up a little more, with individual tracks being slightly less easily discernable. But even on the album’s most diffuse moments (See You Later, Precious Plans, the lengthy closing track It’s About Time), Field Music’s knack for melody remains intact.

While Field Music (Measure) (effectively another self-titled release but with the parenthetical phrase added to distinguish it from the band’s debut) may not comply with preconceptions about double albums, it is still a very good record indeed. Put simply, it’s like a regular Field Music album, only longer.