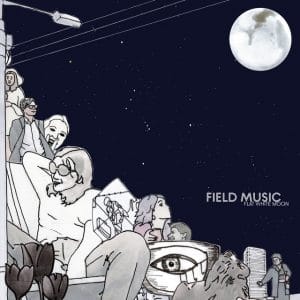 There’s obviously been no case of lockdown procrastination for David and Peter Brewis. While the rest of us have been working our way through box sets, attempting to work from home or just generally screaming into the void, Field Music have enhanced their reputation as one of our most prolific bands.

The last time we heard from the Brewis brothers was in January 2020 with the excellent Making A New World, a project commissioned by the Imperial War Museum. Now, just 15 months later, comes Flat White Moon, an album that swaps the previous record’s theme of World War I to that of more personal, domestic concerns.

First and foremost, this sounds very much like a Field Music album. After 15 years or so, they’ve developed their own trademark sound of jerky rhythms, hypnotic guitar riffs and light nods to funk and disco. While this means there’s no massive surprises in the band’s eighth album, there is a comforting warmth to it, even on first listen.

Orion From The Street is a hazy, disorientating opener to the record – full of sparkling little synth lines and snatches of flute. It may not be the most immediate opener (there doesn’t even appear to be a chorus) but it gently lifts us into what’s to come.

Do Me A Favour, which follows, grabs the attention more, with its jangly guitar riffs, while Out Of The Frame features the kind of stop-start rhythms which made Field Music’s name. Best of all perhaps is When You Last Heard From Linda, a gorgeously crafted Beatles-esque ballad which mixes woozy strings with intricate handclaps.

Although Flat White Moon is a less explicitly political album than 2018’s Open Here, there’s still a lot of focus on current affairs. No Pressure takes a swipe at the lack of shame in the ruling class where nothing seems to have consequences (“Any mistakes, minor or great, they’ll be brushed off”). Then there’s the more straightforward personal songs, like I’m The One Who Wants To Be With You, which takes the old Mr Big song of nearly the same name as its unlikely inspiration, or Do Me A Favour which looks at the issues posed by parenthood.

The energy seems to flag a bit towards the end of the album, with tracks like Meant To Be and The Curtained Room seeming like retreads of past glories. The sprightly funk of You Get Better (in which you can see exactly why Prince famously endorsed them) picks things up though, and ends the record on a high.

There’s nothing revolutionary on Flat White Moon, especially if you’re a long-term fan. What it is, however, is another impressively solid record from Field Music, who have quietly, over the last few years, turned into one of the country’s most consistent acts.