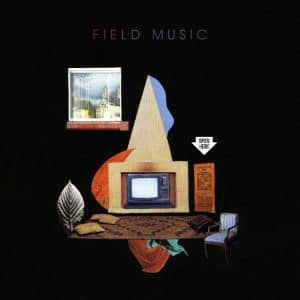 Considering that it’s a subject that has dominated almost every conversation on the political spectrum for the past 18 months or so, it’s a surprise that musicians have been, on the whole, pretty silent about Brexit. Then again, given the opprobrium that Paloma Faith received for releasing a pro-Remain song called Guilty, maybe it’s actually not that much of a shock.

Field Music‘s seventh album pulls no punches though, with several songs explicitly about the referendum result of June 2016, and its resultant effects. It’s all the more poignant, given the fact that Peter and David Brewis’ home town of Sunderland was the first area to declare a result for Leave in the referendum – a topic that Count It Up directly addresses. It’s pretty much a list song, ticking off a selection of privileges that people take for granted: “if you’ve ever visited another country and walked through passport control” and “if you can go through day to day without the fear of violence” and, perhaps most damningly, “you utilise your democratic power for the good of somebody else”. It’s the funkiest howl of rage you’ll hear all year.

Goodbye To The Country is another masterful example of barely suppressed anger (set to another funkily elastic workout), dealing with the rise of hate crime in communities, with vitriolic lines like “don’t you worry I will be fine with the knife at my neck and my very last dime, I got a job in an office block with the swish canteen and an Oxbridge tie”, and Checking On A Message describes the disbelief of waking up on that Friday morning and “hoping that it isn’t true”.

None of this anger and political musing means a change in the Brewis sound, however. Most of Open Here is a simple continuation of Field Music’s by now trademark sound of jerky indie-funk with the usual reference points of Talking Heads, Steely Dan and XTC all ticked off. It’s true that it takes a few plays to really sink its hooks in; in the first few listens it all sounds a bit anodyne, but gradually its magic becomes clear.

Brexit isn’t the only topic covered on Open Here though. There are more than a few songs concerning the travails of parenthood, such as Share A Pillow, which nods closely to Young Americans-era David Bowie, or the beautifully frantic No King No Princess, which could be one of the few songs this year to tackle the issue of gender-neutral baby clothes.

What’s most impressive though is how beautifully Open Here is crafted. The title track takes the pace down a notch or two, but it’s a gorgeously atmospheric number, starting with some Eleanor Rigby-style strings before developing into a masterful orchestral pop song, while the closing Find A Way To Keep Me builds beautifully across its five and a half minutes, gradually introducing a string section, a trumpet and even a choir to round things off in a truly uplifting way. After the political storm of the previous half-hour, this is the closing calm.

Some people will bemoan the lack of a real crossover hit (there’s certainly no The Noisy Days Are Over contained on Open Here) but it’s one of those rare albums that you just know you’ll keep coming back to, time and time again. Hopefully, this will be the record that will, at last, introduce a wider public to one of pop music’s most genuine, unassuming and talented bands.