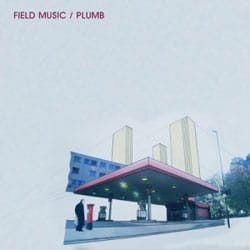 On paper it shouldn’t work – the fourth album by a critically adored but commercially ignored band who merge prog rock, funk and new wave into orchestral scripts. But it’s this stubborn obscurity that makes Field Music one of the most exciting bands these shores have to offer.

Plumb is half the length of the Sunderland band’s last outing, 2010’s Field Music (Measure), a double album that stood at a whopping 70 minutes, but it packs in more sounds and ambitions than their entire back catalogue put together. Whereas its predecessor took a more conventional approach to songwriting, Plumb throws structure out the window, looking to the fragmented loopiness of their earlier work for guidance.

The album’s first single (I Keep Thinking About) A New Thing is a perfect ambassador for this new era of Field Music; it borrows from both of the Brewis brothers’ side projects, leaning on the the funk of Peter’s The Week That Was and the wonky new wave of David’s School Of Language, the result being a collection of overblown, juddering XTC staccato rhythms. The line “I don’t want to simplify it, eloquence is over-rated” perfectly about sums up Plumb – strange, then, that the song is snuck onto the end of the album.

Opener Start The Day Right is similar in its approach – a twinkling, Disney intro soon gives way to an onslaught of guitars and slabs of crushing drums, but its with It’s Okay To Change that they settle into form. Bonkers prog-rock with lashings of post-punk synths, it cuts into Sorry Again Mate with an ease that makes the first three tracks sound like one long, Queen-inspired epic. The latter introduces a wonky, luscious chamber-pop sound that sits brilliantly juxtaposed with the Brewis brothers’ kitchen sink lyrics. “Can I afford another day on my own, Sat in the kitchen with the radio on,” he ponders, as an upbeat arrangement of strings flutter around him.

Field Music’s lyrics and vocals are often overlooked; the grandiose nature of their music being their immediate draw. But Plumb is a reminder that this shouldn’t be the case. As ever there’s a grinding industrial, urban tone to their words – A Prelude To Pilgrim Street speaks of “greasy streets starved of sun” – and themes of nostalgia, obligations, expectations and bewilderment add to an overarching sense of panic.

There’s a subtle urgency to the crunching guitars, timeless orchestra and falsetto vocals, which are best shown off during the 40-second a cappella blitz that is How Many Times. These Beach Boys harmonies are also heard on From Hide And Seek To Heartache, which is the nearest thing Field Music have to a straight-up, sentimental love song. With driving piano, soaring strings and exploding percussion, its relative simplicity is touching as the brothers voices weave around each other: “We used to see so many people every day, The games we used to play, From hide and seek to heart ache.”

Elsewhere the moody, new wave/prog rock blend dominates, with the likes of A New Town, Choosing Sides, Who’ll Pay The Bills and Is This The Picture leading the way. They defy the whip a few times, with Just Like Everyone Else, a stripped back, almost lo-fi, bass-led track that would’ve been at home on their first two albums,and Guillotine, a Pink Floyd-ish woozy sigh.

Despite the obvious comparisons, it’s not a case of simply replicating bands or sounds; above all else Field Music are rock fans who absorb and remould the noises they love. They might scour the last 50 years of popular music for inspiration, but their end product is one of the freshest and most exciting guitar records since… well, since Field Music (Measure).