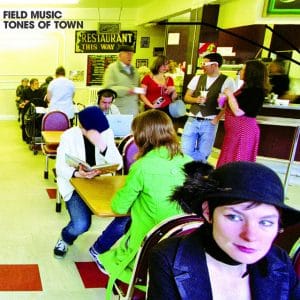 The second album from the best band to come out of Sunderland since Kenickie contains multi-layered pop harmonies and an indie catchiness that owe as much to the heyday of Pulp as to the modern Gangs of New Yorkshire, producing an intro to 2007 that promises much for the musical year to come. Field Music are bright, breezy, accomplished and catchy, indie-pop at its best.

Peter Brewis, David Brewis and Andrew Moore have not only managed to avoid Difficult Second Album syndrome so much as stick two fingers up at it and run away laughing, throwing our way instead something that sounds wonderfully accomplished and deliciously familiar. At times they’re drawing from the past glories of great British bands such as The Kinks and The Small Faces, at times they’re as clever as The Beatles. Despite the West Coast US harmonies it’s drenched in, Tones of Town is the same kind of very English, very knowing pop-cleverness My Life Story could achieve on a good day, mixing late ’60s soundscapes with witty lyrics and angular ’80s guitars.

Second track Sit Tight has a beautiful dreamy quality to its melody as well as a fantastic piano riff, and by the time the album’s best single, A House Is Not A Home comes round, it’s like welcoming an old friend back into the fold, a reminder that while I can’t be bothered to stick singles on the CD player unless I’m reviewing them, I really should make the effort, because otherwise I might spend months missing out and forgetting how good they were before the album arrives.

Working to Work is a lovely little fable of modern life with a fabulous bassline and an almost nursery rhyme quality. Field Music mix together vibraphones, violins and cellos to great effect with a style that’s got much in common with Guillemots and a similar sense of fun, then throw in some almost punk riffs when you least expect them to throw you off balance in the nicest way possible.

The result makes Tones of Town a fantastically listenable album. Gentler and softer than Maxïmo Park, less angular than The Futureheads – both of whom they supported last year and with whom they sometimes share members. And yet that trademark Yorkshire stomp is in there if you listen carefully enough, just hidden well enough that they can’t be accused of being identikit. A Gap Has Appeared is another real gem of a track, with vocals any record would be proud of. Place Yourself is even better, whispery pop loveliness you’ll never tire of hearing.

It’s all still lovingly idiosyncratic, too. They may have been a surprise hit at SXSW last year and have since found themselves named in the News Of The World for creating a new dance craze, but they’re still producing their own records in their own studio in Sunderland and they’re not selling out to the big labels. In protecting their individuality, they’re very much like Belle and Sebastian, another band whose fans could do a lot worse than check them out.

They haven’t risen out of obscurity yet, but they should have. Anyone want to take a bet on them being one of this year’s bands to watch?