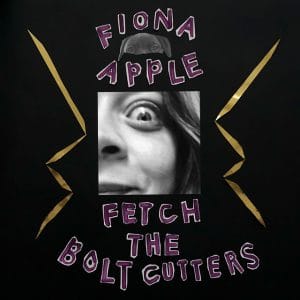 Fiona Apple has never been the most prolific of artists, but an eight year gap since her last album The Idler Wheel… marks her longest period between releases. Apple remains enough of a big name though to make the release of each record seem like an event – when the release of Fetch The Bolt Cutters was brought forward from its original October release date, it did indeed feel as if the internet was about to be broken.

Although Apple is most closely associated with the sort of dark piano pop popularised by the likes of Tori Amos, or Regina Spektor, the first thing that a newcomer would observe about Fetch The Bolt Cutters would be how strange, eerie and just downright weird most of it is. From the cover photo of a partially obscured Apple’s face to the fast flowing, stream of consciousness style of the delivery of her lyrics, there’s an unsettling edge to much of Apple’s fifth album.

Then there are the arrangements, which almost dare you to sit up and listen. Although Apple’s trademark piano is to the fore as ever, there’s more emphasis on percussion than ever before (including some beats apparently played on the box containing her dead dog’s bones), and at the end of the title track, a pack of dogs howl in unison. It’s an album which, on every listen, you pick up another little odd noise you didn’t catch previously.

Throughout, Apple’s vocals are as extraordinary as ever – there’s an intensity to her performance that becomes gripping to listen to. On the opening I want You To Love Me she descends into yelps, purrs and scats her way to the song’s end. On the title track, she combines with Cara Delevingne’s backing vocals, while on the outstanding Cosmonauts, she goes from a blood-curdling scream one minute to an almost whisper the next.

Lyrically too, Apple is on top form on every track. The topics covered on Fetch The Bolt Cutters are not light by any means: the extraordinary For Her begins with a choir of multi-tracked voices chanting, before Apple starts singing “Good morning…” as if she’s about to launch into the old Singing In The Rain standard. Instead, the next line is “You raped me in the same bed your daughter was born” and it’s guaranteed to stop you in your tracks. It’s not even three minutes long, but it’s a song you’re unlikely to forget.

As well as trauma, the theme of female friendships and solidarity with other women is a large one: Shameika (one of the most immediate songs on the record) talks of a young schoolfriend told a bullied Apple that she “had potential”. So many lines sum up a bullied childhood so well, including “I didn’t smile, because a smile always seemed rehearsed, I wasn’t afraid of the bullies, and that just made the bullies worse”.

Ladies is a plea to not let men pit women against each other: “Nobody can replace anybody else, so it would be a shame to make it a competition.” But some of Apple’s most memorable lyrical couplets come in her refusal to stop being opinionated in the brilliant Under The Table: “I would beg to disagree, but disagrees with me,” and “Kick me under the table all you want, I won’t shut up”.

Fetch The Bolt Cutters isn’t the easiest album to listen to – and in these claustrophobic lockdown times, some may baulk at spending 51 minutes with an album of this intensity. Yet while it’s certainly not an album for background listening, those who are willing to invest some time in it will be rewarded by one of the most remarkable records released this year.