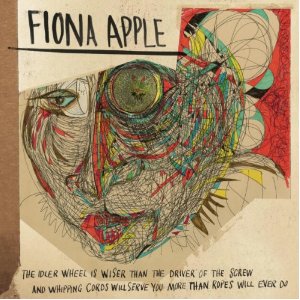 Seven years on from Extraordinary Machine, Fiona Apple returns for her fourth studio album The Idler Wheel… which is at the same time both roaring with rage and swooning with romance.

The first thing to notice on this album is how sparse it sounds compared to its predecessors. Breaking from long-time producer Jon Brion, Apple’s sound is refreshed, allowing her crazy ass vocals to take the lead, often accompanied by nothing more than piano and percussion (with rather occasional interjections from strings). This set-up showcases Apple’s vocals to be terrifyingly raw, rough and in some senses flawed. All the vulnerability is left in – her voice occasionally cracks and the pitch is quite imperfect, but this raw emotional beauty is incredible compared to the abundance of over-produced Glee-esque vocals filling up the airwaves. This is such a striking comparison to the fullness of everything Apple has done before that on the first few listens you’ll wonder if it’s half finished.

Album opener and first single Every Single Night is a distinct highlight, and is slightly reminiscent of the title track of Extraordinary Machine in its moments of sweet softness, though this sweetness is pervaded with a real sense of sadness. The song never really hits a climax, but is satisfying enough to leave you salivating for the relentless percussion of Daredevil. And speaking of climaxes, for Fiona Apple fans the bridge will be a musical orgasm. She growls. She roars. She cracks. She reminds you what you’ve waited seven years for.

Valentine is reminiscent of Cy Coleman lyrically, which makes sense considering Apple’s appearance on a Cy Coleman tribute album. The melody twists away from Coleman up into the more desperately distinctive sound of Apple’s despair during each chorus. There is something deeply romantic about this song, despite the sadness of the lyrics. It has a slight feeling of pastiche to it, but in the most respectful way possible.

Jonathan is enjoyable but not as immediately distinctive as many of the other tracks on the album, in a similar way A Mistake was on When The Pawn; it’s rather a long term grower. On Left Alone, Apple is quite clearly frustrated by herself. But the song takes rather comical turns with the wit of the lyrics.

Werewolf is a beautifully twisted waltz, beginning softly and simply before turning into something rather scarier, similar to the metaphor in question. And it has the great hook “Nothing wrong when a song ends in a minor key” which is such simple musical wit. On to Periphery, and every long term Apple fan should be able to hear in their head how she will sing the word “periphery”. The track is reminiscent of the likes of Get Him Back or O’ Sailor if all the instrumentation was stripped away, allowing Apple’s percussive piano playing to drive it forward.

Regret is a really slow listen until Apple starts screaming mid-way through; which saves it from becoming too trudgey. Then comes a shocker, Anything We Want. It almost sounds like Apple singing a happy song. But the lyrics are still darkly poetic; it’s an unusual twist and is certainly more realistic than a typical love song. Album closer Hot Knife is a wonderful chant song, starting off sounding almost tribal before cutting away to harmonised a cappella vocals and is entirely unlike any other Fiona Apple song. It’s also insanely catchy.

The Idler Wheel… is a really incredible album, where Apple has quite cleverly developed musically in just the right way, creating something utterly distinct and different to her earlier work whilst still retaining all the characteristics that won fans over to begin with.