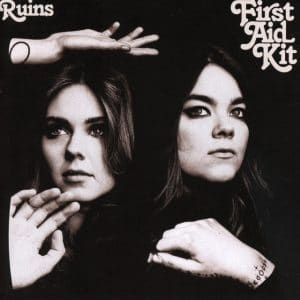 Having steadily increased their sonic horizons from the lo-fi and intimate kickabout of their Drunken Trees EP to their last foray into long-players with 2014’s lush and mature Stay Gold, Ruins sees them expand comfortably into their own skins. Produced sympathetically by Tucker Martine, it features appearances from stellar luminaries of R.E.M., Midlake and Wilco.

Inspired by the country legends Johnny Cash, Gram Parsons and Emmylou Harris (to the point of writing a dedication to her), the Swedish sisters quietly set about absorbing modern influences of Bright Eyes, Devendra Banhart and CocoRosie. They take the elemental nature of country singing with tales of love, loss and regret and give them a modern makeover, delivered with intertwining harmonies bathed in a natural and unforced panache.

Rebel Heart sees further layers of lushness and sophistication emerge from First Aid Kit’s ability to turn the personal into the epic. Washes of pedal steel guitar, mariachi trumpets and nifty picking shore up a tune born for stadium ‘lighters-aloft’ moments, while Postcard exhibits a more poppy playfulness that gallops along with a wry smile playing around the edges.

Fireworks unfolds over a repeated guitar figure into a heartfelt kitsch paean, a singular take soundtracking innocence bruised. Borrowing from classic ’50s ballads, it recalls the idea of setting high standards that can be impossible to achieve, and which prove ultimately to be crippling. Cheery stuff it is not, but it is beautifully delivered. Conversely the rootsy It’s A Shame appears to celebrate choosing your own path and damning loneliness. These ruminations continue with To Live A Life seeing a more acoustic turn, as the idea of solitude is pondered. Title track Ruins documents the trials of being thrust into the spotlight and the enduring life of touring where the on-the-road sibling experience is summed up by Klara singing “I lost you didn’t I?… but first I think I lost myself.”

While not as immediate as Stay Gold or The Lion’s Roar, Ruins continues to expand the Söderbergs’ horizons, without any drastic change to the velvet harmonies comforting the cursed that they have become cherished for. A few more rough edges and sonic variety would shake things up and possibly open new avenues, but for now things aren’t in Ruins, another good (if not quite great) First Aid Kit album.