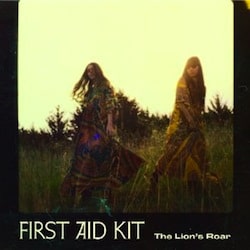 First Aid Kit have come a long way since they first made a name for themselves in 2007, posting their take on Fleet Foxes‘ Mountain Peasant Song on YouTube. In the intervening four years they’ve toured with some of folk’s royalty, including Fleet Foxes, and released their critically acclaimed debut album, The Big Black And The Blue. This follow-up could be the album that sees them nudge the likes Laura Marling and Mumford and Sons out of the way in order to claim a place at the top table.

Sisters Johanna and Klara Soderberg’s first album was sparse and haunting, with minimal accompaniment, leaving the emphasis on their crackling, campfire melodies. This time, under the guidance of Mike Mogis (whose previous charges include Bright Eyes, Rilo Kiley and Jenny Lewis), they’ve added a band, making their sound warmer and more deliberate.

On first inspection, it appears the Soderbergs may have gone soft; the eerie, lonely songs that made up their first record having given way to rousing, upbeat tracks. Yet bittersweet is the name of the game this time around, and beneath the toe-tapping slices of traditional country and folk are heartbreakingly sad lyrics that defy the Soderbergs’ ages (just 21 and 18).

Take Emmylou, one of their best songs to date. With gorgeous country twangs and sighs, it name checks their idols – “I’ll be your Emmylou (Harris) and I’ll be your June (Carter) and you’ll be my Gram (Parsons) and my Johnny (Cash) too….no I’m not asking much of you just sing little darling, sing,” – but for all the romantic sentiment there’s no escaping the sadness that has overshadowed these lives. There’s no reference made to that in the lyrics, but with voices like these there’s also no need to do so.

Blue is their most melodic track and would appeal to the nu-folk scene, with gentle drums and xylophone carving an upbeat, sunny sound that makes it easy to again overlook the desperately sad lyrics – “The only man you ever loved and you thought was going to marry you/Died in a car accident when he was only 22/And then you decided love just wasn’t for you.” Their subtle, poetic words never fail to touch the right nerves – an incredible feat for a duo who are not native English speakers.

To A Poet gives an insight into their lyrical inspiration – “It always takes me by surprise how dark it gets this time of year/And how apparent it all becomes that you’re not close, Not even near.” The long, dark Scandinavian winters play as much of a role as the region’s scenery and landscape, which is never more prominent than during Wolf. Rolling guitars and distant chants paint pictures of forests and tumbling streams in a way never quite managed with their debut.

The contrasting emotions come to a head during the last song, King Of The World, which sees us enter the sisters’ chaotic minds, caught up in the hum of the modern world (“At 10 in the morning I was laughing at something at the airport terminal, At nine in the evening I was sitting crying to you over the phone…I keep running around trying to find the ground but my head’s in the stars and my feet are in the sky”). It’s a simple sentiment wrapped in a mariachi hoedown, accompanied by Conor Oberst and The Felice Brothers. It’s also a brilliant way to end a beautiful album that proves that sometimes more is more.