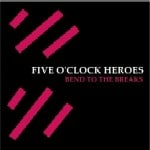 You may have seen or heard of this band fleetingly over the last year and a half – they’ve supported everyone from The Rakes to Brendan Benson to The Bravery, released a handful of hook infested singles and have probably played in that old boozer in your town at least seven times.

Well, ladies and gentlemen, it’s not all insignificant. There has been a point to all of this, and it’s staring at us right in the face. Five O’Clock Heroes’ debut album, Bend To The Breaks, is here, now. Available to buy, physically in existence. 12 tracks of pure, lean as the modern day supermodel, catchy as chicken pox, pop-rock, that’s just waiting, begging, to be blasted out of your speakers before a boisterous night on the town.

The influences are clear for all to see. Antony Ellis’ jerky, enthusiastic and impassioned vocal calls to mind all the right names – Weller, Sting, Elvis Costello, Kevin Rowland, Joe Jackson – and lay a solid foundation for the songs on offer.

Musically, this is nothing overly adventurous – you won’t find much variation from a verse egging itself on to get to the (potentially) unit-shifting chorus, but there is a stark beauty in how well they do it, their sheer enthusiasm, their crisp, tight musicianship and their undying willingness to deliver us a set of tunes that will brighten up our day.

And hell, when compared to the more lauded exponents of this structure – Kaiser Chiefs, Hard-Fi, The Fratellis et al – these Anglo-Americans come out brawling like Mike Tyson on MDMA, quite often victoriously.

You see, there are moments here that are simply impossible to resist. The jaunty, choppy Head Games kicks off the LP in formidable fashion, Run To Her and In Control pick up the pace and provide some real aural thrills, whilst White Girls, the reggae soaked Give It Up and Good Lovers are as close to the Holy Grail that is the perfect pop song as any band has trodden in recent times. Any of these, and particularly the latter, you feel, may well be their passport to the snazzy lights of the mainstream.

Not to forget Stay The Night, which revolutionises the art of that chat up line with its beating around the bush rejecting lyric of “Oh won’t you stay the night, don’t wanna be alone.” Or the direct, Jam-recalling Corporate Boys, a delightful stab at those slick, soulless City types that we love to hate. “Oh I’m oh so sure, that my money’s clean and my mind is pure,” sings Ellis, mockingly.

Indeed, there’s much to love on this album, which comes across more like a collection of hit singles – something pretty remarkable for a band in its relative infancy. There’s no filler, not an ounce of fat to be seen, which represents a harking back to the good ‘ol days from which they obviously take their cue. It’s by no means cutting edge – don’t get me wrong – but there’s a hell of a lot to be said for good, punchy straightforward rock tunes ahead of any sort of studio wizardry or self indulgent maraca solos (or whatever), and Bend To The Breaks is a glowing example of this.