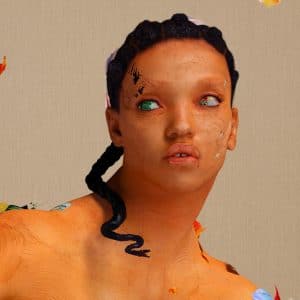 It’s been a while since we’ve heard from FKA twigs. Four years to be precise, which was when she released her last EP, M3LL155X. Since then, Tahliah Debrett Barnett has undergone a pretty traumatic time: a break-up with Hollywood actor Robert Pattinson, and in December 2017 she underwent surgery to remove fibroid tumours from her uterus.

So it’s not surprising that Magdalene sounds, at times, like a sonic encapsulation of heartbreak. Yet, as the artist herself said in a recent interview: “If everybody only released work when they were at their peak health and happiness, it would all sound like the Teletubbies or something.” Rest assured that Magdalene sounds nothing like the Teletubbies – unless Tinky Winky’s life has lately taken a really dark turn.

In fact, this album sounds like nothing else released this year. Magdalene takes the sound perfected on her debut LP1, and somehow improves on it. Whereas LP1 was an easy album to admire, there was a coldness about it. There’s none of that about the follow-up, in which we’re plunged straight into twigs’ sense of angst. Some of these break-up songs will end up staying with you for a very long time.

So, Mirrored Heart has a sorrow built into it that’s almost unfathomable, a sad but not bitter lament about couples who are still together while she’s on her own (“For the lovers who found a mirrored heart, they just remind me I’m without you”). And the desperately sad Cellophane is almost impossibly affecting: it’s hard to hear the line “They want to see us apart, want to see us alone” without thinking of the tabloid storm over her relationship with Pattinson.

Cellophane is also one of the many songs on Magdalene where twigs’ vocals really come to the fore. Previously, her voice has been hidden or distorted by electronic effects, but here she’s given proper room to breathe. For much of Magdalene, she’s pretty much in an undefinable class of her own, but there are definite echoes of both Kate Bush and Björk in twigs’ relentless quest to be adventurous and experimental.

As with her debut, there’s a whole raft of producers on hand, but it’s the names of Nicolas Jaar and Noah Goldstein who stand out. Jaar co-produces one of the best tracks, Fallen Alien, which builds up furiously, and co-writes and produces the opening Thousand Eyes, full of eerie atmospherics which also hint at her unhappiness at being an unwanted focal point for the tabloid journalists for the last few years.

Magdalene is an album that, like FKA twigs herself, defies both genre and classification. Yet it’s a late contender for album of the year, with songs that will live you for months to come.