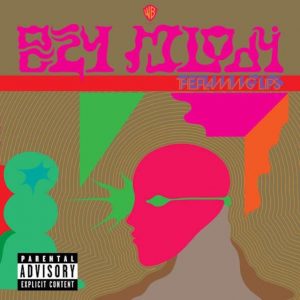 It’s not particularly surprising to discover that the title of the latest Flaming Lips album came from a Polish book Wayne Coyne was “reading”; the sound of the words, and the imaginative leaps they might conjure up appealed. Plucking sense from a sea of confusion is the task The Flaming Lips have set their fans this time around.

On first impressions, Oczy Mlody is a confusing and frustrating listen with little in the way of melodies or hooks to grab on to. Instead, Coyne and his cohorts have created an album that is somewhat abstract. It’s a soft focus affair that can be difficult to grasp, with ideas coming into view, only to disappear into a fog of ambient electronic noise or dissipate in under a wave of reverb and delay. Coyne’s vocals retain that peculiar damaged, childlike quality, but they too are often part of the sound of the whole. He drifts in and out, almost daring his audience to pick out lyrics and make sense of them. This is an album that requires patience to get to grips with, but given time it reveals itself to be one of the band’s most thought provoking and enveloping works to date.

If there’s a theme to be found running throughout Oczy Mlody, it’s that of a fairy tale land gone awry, twisted by violence, fear and hatred. Coyne frequently speaks of magical beings and creatures over a soundtrack that might well be some of the most threatening and darkened music The Flaming Lips has ever produced. It’s hard not to equate the idea of destroying a beautiful land full of hope and amazing inhabitants with the political landscape developing in the US and here in Europe. It’s also possible that alongside Polish books, Coyne’s been dabbling with the concepts found in Bruno Bettelheim’s The Uses Of Enchantment, a book that delves into the psychological depths of fairy tales, or perhaps the punks have been taking acid again, and are starting to feel the passage of time. Not only is this an album where wonder and horror clash, but the concepts of age, wisdom and idiocy, and being really, really stoned all find their place too.

Sunrise (Eyes Of The Young) documents the moment where nature reveals itself to be red in tooth and claw. “The sunrise insists on gladness, but how can I be glad, now my flower is dead…you’re showing me the truth, but I don’t want to believe you” croons Coyne as the band come close to the grandeur of Do You Realise? for the only time on the album. There is however, some peace made by the song’s close as the power of love and imagination is embraced. It’s a glimpse of hope. Also similar to the tone of the songs from Yoshimi Battles The Pink Robots is The Castle, although musically it is more of a lament than a celebration. Its imagery meanwhile comes straight from the films of Hayao Miyazaki.

Far from putting away childish things Oczy Mlody suggests we should embrace the innocence of youth. How speaks about being young and killing everyone if “they fucked with us” with “baby guns” but it in this context sounds more like the gung-ho bravado of political leaders. When adults are described as behaving like children, they’re often just behaving like adults.

One Night While Hunting For Faeries And Witches and Wizards To Kill finds the protagonist on a hunt, only to have the whole thing backfire (literally) whilst attempting to blow out the brains of a wizard. The very things he’s attempting to kill fix him up. Guns and violence are, in the world of The Flaming Lips, childlike in their idiocy, wielded by morons of Elmer Fudd proportions. Healing and understanding comes from nature and wonder.

It’s not just nature and wonder that provide what ails us, sometimes a dash of acid helps too, and as a whole, Oczy Mlody feels like a powerful acid trip, with moments of insight, wonder, colour and fear appearing and disappearing constantly. This hallucinogenic voyage is first encapsulated on There Should Be Unicorns where the sun hovers above the horizon for hours, purpled eyed unicorns, day-glow strippers and re-aligned police officers embrace a future full of love. On Galaxy I Sink, Coyne sees the universe in a giant eye, and his own life in the specks floating in his own frazzled eye balls. Do Glowy recounts a night, where the world is dripping and glowing and the flowers are carnivorous.

The comedown comes in the shape of Almost Home, the musical equivalent of clicking your heels or taking long slow deep breaths. Its relaxed chiming lope comes as something of a relief after an album full of twists and hidden depths. It’s possible that Oczy Mlody will disappoint those looking for an easy hit, or the sound of old-school Lips, but for those willing to persist and explore, it’s a work of nuance and intelligence.