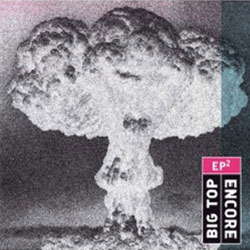 Wonderful album though it was, the Flare Acoustic Arts League’s last record Cut was one of those indie releases that seemed destined to be only heard by the group’s cult following.

Led by the creative, restless master bohemian LD Beghtol, the collective returns with another panacea for our troubled times in the shape of the sparkling Big Top/Encore. Packaged as if it were two separate EPs, the record is of course nothing of the sort and in fact is probably Beghtol’s most cohesive release to date. Most of the art house flair seems to have been diverted to the physical packaging, which comes in various formats with all kinds of little bells and whistles attached to please the devoted record collector.

Stomping his sizable shoes firmly in the psych rock paddock on the opening Last Clown Standing, the swirling organ driving the song providing the perfect musical backdrop for Beghtol’s barbed nod to childhood’s end. The song has a welcome bite and drive – for all his talent, Beghtol can sometimes get a bit too cute on his other recordings, but here there is a focus and welcome brevity.

It is notable that one of the album’s two covers is a lovingly realised version of the Psychedelic Furs‘ Yes I Do (Merry-Go-Round). A great song that doesn’t often get a spin these days, so hats off to Beghtol for digging it out of the vaults and for making sure Jon De Rosa is on board for the vocal harmonies.

The psych pop nous of the Furs is also readily apparent in Begholt’s own Hideous Ethnic Stereotype, a brilliant little gem of a pop song that blazes by in under two minutes while still finding the time for some typically jaundiced lyrical slaps.

It seems as if Beghtol has taken on board some of the criticism of his more outré moments on previous releases. Nothing on Big Top/Encore outstays its welcome, despite songs such as Scenario and Case Study still finding time to throw in Beghtol favourites such as trumpet, glockenspiel and toy piano, although the ukulele is notable by its absence.

The comparisons with Stephin Merritt and the Magnetic Fields will inevitably follow given the close ties between both artists, but frankly they are reductive and tend to do Beghtol a disservice while plumping up Merritt’s ego just a little further.

Beghtol’s popularity with other artists on the US independent scene is readily apparent, with the likes of De Rosa joined by drummer Sam Lazzara, cellist Julia Kent and keyboardist Kendrick Strauch. Best of all is the silken voiced Dana Kletter, who battles royally with Beghtol on the deliciously vitriolic Does This Sound Appealing? A song tailor made for covering by She & Him.

Beghtol stretches out just a tad on the final two tracks, The Kinetic Family (the album’s only real misstep) and Geography Cure, bringing to a close another thoughtful, musically immaculate and lyrically involved Flare album. For all Beghtol’s playfulness this is at heart a tightly focused, cleverly sequenced alternative pop album that ticks all the right boxes. It deserves to be heard by a larger audience.