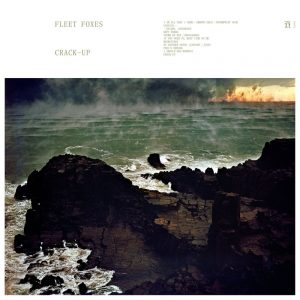 It’s a bizarre sensation: listening to something that’s clearly had a lot of time, love and attention poured into it, something obviously impressive in scale and ambition, made by artists admirably trying to push their sound forward – and it leaving you completely unmoved. But so it is with the first four tracks on Crack-Up, Fleet Foxes’ third LP and their first in six years.

Opener I Am All I Need / Arroyo Seco / Thumbprint Scar is as fragmented as its title suggests: over the course of its six minutes, we get a grainy intro with grumbly male and female vocals, majestic trademark harmonies, acoustics played with the attack of electrics, an interlude that sounds like Simon & Garfunkel, backwards guitar, surging strings, sloshing water, and a choir of schoolchildren singing and clapping hands. The music mirrors the “rising, falling, melting, freezing” in the lyrics, but, even after multiple listens, the track doesn’t coalesce.

One could be forgiven for thinking they’d put on the wrong record when that low male grumble comes in – frontman Robin Pecknold going for Leonard Cohen but coming off more like Eastenders’ alcoholic hard-nut Phil Mitchell. Using this new voice in his toolkit (it reappears on I Should See Memphis and Crack-Up), he attempts to tell a story and create a contrast – at multiple points throughout the song, sky-scraping harmonies are undercut by his mumbled solitary interjections; to dramatise the idea of holding two opposing thoughts in one’s mind at once.

Cassius is full of false alarms, simultaneously doing a lot and very little, with no discernible hook or tune. The orchestral rush midway through Naiads, Cassadies should be incredibly moving, a moment of release, but instead feels leaden and laboured. Kept Woman, meanwhile, is maudlin and mannered, the kind of fusty fussing that hirsute nu-folkers and Laura Marling were regularly accused of back in the day; its title and lyrics (“cinder and smoke hanging in the air”) doggedly archaic, despite being inspired by recent conversations with a female neighbour over the garden fence.

This sensation of being left completely unmoved is particularly bizarre in relation to Fleet Foxes – a band adored for a pure, uplifting sound that flirted with the divine, best experienced in a forest or church hall in reverential silence. Pecknold was right to call second album Helplessness Blues “less poppy, less upbeat and more groove-based” than their perfectly-formed debut and Sun Giant EP, but it never felt like a difficult or messy listen nor lost sight of what made the band special – indeed, inspired by the progressive folk of Roy Harper‘s Stormcock, Steeleye Span‘s Please To See The King and Astral Weeks, it felt the logical next step. In principle, a further move in that direction should have been the right way to go.

Pecknold debuted some of these songs during solo opening slots for Joanna Newsom last year and it makes for an interesting comparison – no matter how seemingly ostentatious her arrangements or dense her literary allusions, Newsom’s songs are always able to take flight. “There are certain things I don’t feel like I nailed on those old albums, so I wanted to make sure I could try those things, whether it’s a multi-part song or a certain kind of finger-picking,” Pecknold has said, and there’s a feeling that he didn’t know when to stop: for a band so in touch with the great outdoors, these recordings are oddly airless and unnaturalistic.

By the end of the Helplessness Blues tour, Fleet Foxes were burned-out. Pecknold went backpacking alone in Hawaii and Nepal, did an intensive woodworking course and enrolled in an undergraduate programme at Columbia. The hiatus lasted longer than anyone expected (“I definitely came to terms with the fact that this band was never happening again,” guitarist Skyler Skjelset has said) but Crack-Up is testament to the fact that that time at university was well spent: there are numerous literary and historical references (mythical female water nymphs; Grendel the March-Stepper in Beowulf; Knut Hamsun) and theatrical touches – halfway through On Another Ocean (January / June) there’s a time-jump from January to June, and the music changes up accordingly. The album takes its name from an F Scott Fitzgerald essay in which the writer describes his own creative and existential crisis.

It’s quite extraordinary to track the ground ex-drummer Josh Tillman has covered since leaving the band in the aftermath of that ill-fated tour. On 2012’s Fear Fun, recast as Father John Misty, he was a grave-digging, novel-writing, no-fucks-giving Hunter S Thompson character made flesh who made Fleet Foxes look like joyless dullards by comparison; skip forward five years and he cuts an increasingly weary and wearying figure, an (in)famous entertainer decrying entertainment. Fleet Foxes’ return promised to act as a balm to this – a more earnest, less melodramatic alternative, with no contentious lines about Oculus Rifts (the closest Pecknold, a man far more likely to reference Jonathan Swift than Taylor, comes to social commentary is Cassius’ allusions to the death of Muhammad Ali and the brutality of the American police, their cars’ “useless sirens scream(ing)”). While recent Pecknold quotes such as “I was watching this cult of personality just destroy the country, really tear it apart” could almost be mistaken for Father John Misty lines, his artistic response was very different to Tillman’s extrovert hectoring, aiming to create something “very personal… something that you had to seek out.” For reasons stated above, however, Crack-Up is, in its way, just as exhausting a listening experience as Pure Comedy.

Just when one is about to give up hope, those Fleet Foxes voices burst in on Third of May / Odaigahara and make a beeline for the back of the neck. The track, addressing Pecknold’s friendship with fellow founding member Skjelset and titled after his birthday, flows beautifully, making light work of its nine-minute running time; it seamlessly breaks down for a section (“Was I too slow? Did I change overnight? Second son, for the second time”) and then, reacting to this self-questioning and inner-turmoil, spins off tumultuously.

Melodies as miraculous as White Winter Hymnal, Mykonos or Battery Kinzie are in short supply here, but moments of the old magic remain. Mearcstapa is a magnificent piece of Old English prog-folk, with a gripping, expertly-judged string arrangement, Fool’s Errand is classic Fleet Foxes, while If You Need To, Keep Time On Me is so elementally pretty and affecting that listeners will dash to the credits to check if it’s an old traditional song. On Another Ocean (January / June) is in possession of the most memorable vocal hook on the entire record (“wherever you run”).

Crack-Up closes in underwhelming fashion with its title track, another multi-parter in the mould of I Am All I Need / Arroyo Seco / Thumbprint Scar. Robin Pecknold has talked of approaching the structure of these longer, “non-linear” tracks like “a stained glass that’s been shattered and reassembled.” Sadly, as on the opener, these disparate pieces don’t even feel like they belong to the same pane.