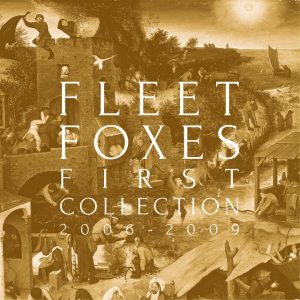 Fleet Foxes are a unique band for one simple reason – they are impossible to hate. You may have an issue with how pretentious they seem. Or you may not like their celestial, pure folk aesthetic. You may not even like the idea of them. But it’s impossible to hate a band that are this damn good.

First Collection 2006-2009 is a timely reminder of just how good they really were, and how good they always have been. There are moments on this collection, especially if it’s digested in one sitting, that are truly astounding, no matter how many times you’ve heard them. Put in the context of this new release, even the most popular tracks like Mykonos and White Winter Hymnal sound fresh and exciting.

The really interesting thing about this release is that it contains a whole host of rare and hard-to-find material. Whether they should have just released this stuff by itself is a question for another day – do fans really need new copies of material that they already own? Are the self-titled album and the Sun Giant EP diminished by being used to pad out an expensive box-set? That’s up to you.

But the key selling-point, the rarities, are incredible. Much in the same way that Robert Smith’s curation (no pun intended) of The Cure‘s deluxe reissues meant that every disc came with bonus material from live tracks to home demos, here we are presented with four ‘basement sketches’ that turn out to be worth the price of admission alone.

The ‘basement’ version of Ragged Wood is charming and spooky. It sounds rougher and more woolly than the final version, and is a delight to hear. The rudimentary drum machine on the ‘basement’ version of He Doesn’t Know Why actually complements the lo-fi production. The glistening, glassy guitars are also more pronounced than the final version, offering some insight into how bandleader Robin Pecknold carries sounds through from the demo stage to the final product.

The ‘basement’ version of English House is fantastic. Pecknold’s voice is fuzzy, the guitar hazy. It’s probably the most different version on offer here, and it’s far more energetic than the final version – in terms of sound, not pace. It makes you wonder why Pecknold even bothered to finish the first record, because – much like with Bruce Springsteen‘s Nebraska – the demos are so potent.

In terms of the other rarities, Silver Dagger is a standout. It’s wistful and yearning, like early Neil Young. It’s more straightforward than a lot of the early Fleet Foxes material, and should have featured on the first record. White Lace Regretfully and Isles are both delicate, but the lullaby quality of the latter makes it another standout. It too has a Young-ian earnestness, with just a solo guitar backing Pecknold’s incredible voice.

As if these rarities weren’t enough, the entire self-funded, self-released 2006 10″ EP is also here. From the jaunty folk-rock of opener She Got Dressed (an absolute classic), to the blissful closer Icicle Tusk, you see Pecknold trying on a range of different outfits, with each costume pointing to the eventual direction that the band would take. This, along with the ‘basement’ versions, would have made for a much more potent release – and in reality, it’s probably only those two things that are appealing to buyers.

In the Hot Hot Rays, from the 10″, is key to understanding the evolution of Fleet Foxes. It’s a Tom Petty-esque, Byrds-ian jangle pop strut that resembles nothing else they ever recorded. It’s probably the most straightforward, loose rocker in their entire catalogue. It just shows another side to the band that they could have, and probably should have, explored on the debut album. It also makes for an interesting response to anyone who might find Fleet Foxes too cerebral, too artsy.

Anyone Who’s Anyone, another track from the 10″, is intriguing, to say the least. There’s a Ghost Riders In The Sky-ish, country-gothic guitar line twanging around in the background like something out of a demented rodeo in Hell. It’s also, other than the guitar, pretty meat-and-potatoes as far as Pecknold is concerned. It’s low-brow, a little bit raunchy. It definitely would not be a perfect fit on any of their three studio albums – it’s too dirty, too gritty. There’s even a hard-rockin’ guitar solo on there at the end, too.

Now that Fleet Foxes are a completely changed band, complete with The Walkmen‘s Matt Barrick on drums and a revolutionary, experimental outlook, this collection stands as testament to the quality they have always had since their very earliest iteration.

The recordings here are ideal for longtime fans, whose only gripe might be paying for material that they already own. But this is not a big problem when you consider just how many rare tracks you get for your buck. If you don’t already own the first EP and the self-titled in physical formats, then you simply must purchase this. Music doesn’t really get much better.