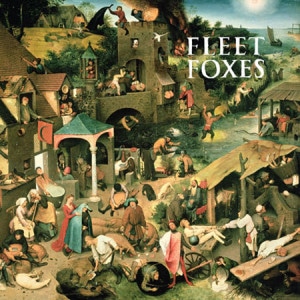 If their performance over the pond at SXSW raised a few eyebrows, and the recent EP Sun Giant hinted at what was to come, it still wouldn’t quite prepare you for this album.

A few years ago Mercury Rev and Flaming Lips made two of the most beautiful pop records in Deserter Songs and The Soft Bulletin. In doing so they took a purely American sound that was full of desolation and hope, and yet managed to perfect pop at the same time. Sigur Rós broke hearts and sent shivers up and down spines when they were finally accepted into mainstream consciousness.

This year, Bon Iver’s For Emma has stunned us with its stripped down introspection and splendour. Now we have Fleet Foxes, a gorgeous contender for album of the year. It’s far from sparse however, and as such, sits at the opposite end of the spectrum to Bon Iver. Yet they both inhabit a similar space in terms of how music can make you feel things far more intensely.

It opens with some glorious close harmony singing, something that singer Robin Pecknold likens to the feeling of family. There is a familial feel to the vocals; the way their voices weave in and out of each other, supporting and strengthening each other until the song drips with liquid sunshine.

There is something undeniably 1960s West Coast about Fleet Foxes sound, and it is hard not to draw comparisons with the likes of Beach Boys and Crosby, Stills, Nash & Young. But although forms of traditional music are explored throughout the album Fleet Foxes have a distinctive sound that is all their own; poppy, yes, but there’s a strong folk flavour throughout, at times going back as far back as to evoke medieval influences.

The harmonies of the vocals are perfect and linger on gospel influences and occasionally (as on White Winter Hymnal or Oliver James) take a spiritual form. There are liberal sprinklings of flute, banjo and accordion throughout to give a sense of a band that are at odds with the 21st Century, one that can easily be imagined touring in a caravan pulled by some sturdy horses, even before the oil runs out.

If all of this sounds a little po faced, it shouldn’t. This is a celebration of how music can fill hearts with joy. If at times the themes are a little on the heavy side, Fleet Foxes still manage to make them sound like soothing lullabies. This could be the closest this generation gets to its own Pet Sounds. A stunning debut then, and one that will make Fleet Foxes one of the most sought after bands of the year.