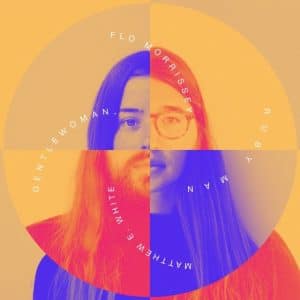 The epitaph of ‘hardest working man in showbusiness’ has been bestowed upon many people, but Matthew E White must surely be this year’s contender. As well as running his own studio, Spacebomb, in Nashville, he’s recently produced albums by the likes of Natalie Prass and Slow Club, released two well-received solo albums, and also leads his own avant-garde jazz band called Fight The Big Bull.

White’s showing no signs of slowing down during 2017. His first release of the year is a collaboration with the young London-based folk singer Flo Morrissey, who created a stir of her own with her debut album Tomorrow Will Be Beautiful. Morrissey and White first met at a tribute concert for Lee Hazelwood at the Barbican Centre in London, and performed Some Velvet Morning together. Now, very much in the vein of Hazelwood and Nancy Sinatra, they’ve recorded an entire album of duets together.

Gentlewoman, Ruby Man is a collection of cover versions (the aforementioned Some Velvet Morning isn’t on the track listing though) by a suitable eclectic bunch of artists, recorded as in the usual Spacebomb tradition, in White’s studio with his house band. There aren’t many albums that can take songs by the likes of Frank Ocean, Leonard Cohen and James Blake, and make it sound like a coherent album.

It helps that Morrissey and White obviously get on so well – their voices work together beautifully, although there aren’t many ‘duets’ in the traditional sense of the word. For many of the songs, one will take lead and the other will deal with the backing vocals. So, Cohen’s classic Suzanne is tackled by the deadpan voice of White while Morrissey coos in the background, and Blake’s The Colour Of Everything is sung beautifully by Morrissey.

What’s most impressive though is the way in which many of these songs are transformed into entirely different beasts. Frank Ocean’s Thinking About You is re-imagined from woozy comedown anthem into a lovelorn blues ballad, while Little Wings‘ desolate lo-fi acoustic number Look At What The Light Did now is transformed into a lush, soulful number in which White rather sweetly introduces Morrissey with a burst of pre-recorded applause.

There’s also a superb cover of Barry Gibb‘s theme for Grease, which most people would probably treat as a comedy song – here, it’s played completely straight, banishing the kitsch reputation its acquired over the year and sung with yearning and a little bit of sadness. It’s also as funky as hell, and as impeccably played and arranged by the Spacebomb band as you’d expect.

Admittedly, there are a couple of mis-steps – the closing track of George Harrison‘s Govindam is far too long at over six minutes, and brings back some bad memories of Kula Shaker, while their take on the Velvet Underground‘s Sunday Morning, while not a bad version exactly, is unadventurous compared to some of the other tracks here. Yet Morrissey and White are obviously having the time of their lives, and that shines through onto the record. They may not turn out to be a Lee & Nancy for the 21st century, but Gentlewoman, Ruby Man is a massively enjoyable listen and is hopefully only the prelude to more work between the pair.