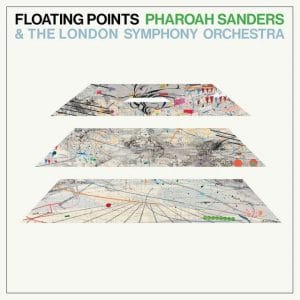 There are collaborations that come along every once in a while that practically guarantee greatness. This collaboration between Floating Points, Pharoah Sanders and the London Symphony Orchestra is one of the very few that guarantees something truly outstanding.

What’s even more special is that this collaboration wasn’t even the idea of Floating Points – the DJ and electronics wizard Sam Shepherd – but the result of a discussion between the label (David Byrne’s Luaka Bop) and Sanders himself, who professed an admiration for Shepherd’s work. While Shepherd’s critical acclaim has grown in recent years, this recognition must have been a particularly high point for someone so fresh into their career: Sanders’ unchallenged, undisputed status as one of the greatest saxophonists of all time has been in place for around 50 years.

Ever since he was christened “Pharoah” by his mentor Sun Ra in the early ’60s (his birth name is Farrell), Sanders has led a singularly incredible career for the past 60 years, but during his most well-known period (1965-1973), he was releasing masterpieces under his own name (Karma, Jewels Of Thought, Deaf Dumb Blind, Thembi, Black Unity), and in collaboration with others (he appears on John Coltrane‘s spiritual jazz classics Ascension, Kulu Se Mama and Meditations, and features in a prominent role on Alice Coltrane‘s legendary Journey In Satchidananda, which is one of the finest albums of all time, in any genre).

So – Promises. As with all music you could reasonably call ‘free jazz’, it’s incredibly difficult to put any kind of qualitative description to music this open, and this amorphic, but rest assured that all of the kinds of things you’d expect to hear on this record are here. Sanders’ playing over these nine movements is restrained, sensual, romantic and glorious as ever, weaving in and out of focus, spread liberally and wonderfully across the lush, soft beds of electronic haze. Shepherd’s string arrangements, which were recorded by the LSO in strictly socially-distanced sessions in the middle of last year, complement and embellish Sanders’ intuitive, sensitive playing and emphasise and aggrandize his most passionate moments.

Throughout the entire, continuous piece, Shepherd’s various instrumental contributions (celeste, harpsichord and more), run in a kind of symbiotic duality with Sanders’ tenor sax, adding different shades, and indeed some lighter and darker moments. The violin solos in Movement 9 (right at the end of the album) are also simply stunning, highly intuitive and even nostalgic in their soft attack of your senses. Despite Sanders’ playing being the primary, central focus of the album, it’s not a solo saxophone record, and all of the other musical jigsaw pieces that Shepherd puts together work perfectly in unison with the others. This is, for lack of a better term, a perfect example of how to put together a soundscape to both highlight and support the work of a master solo player.

Owing to Sanders’ advancing years, this album may be one of the last pieces ever created by one of the true gods of jazz music. While that may be an unhappy thought, this album is anything but. It is a key work – a significant milestone – in the grand history of not only Sanders’ career, but the whole free jazz style he helped pioneer. In fact, you would have to go back to 1988, and that year’s Africa album, to find a release this important in Sanders’ catalogue (and certainly one this good), and with the 2008 Universal fire destroying much of Sanders’ recorded output, the chances of finding any unreleased gems in the vault are slim to none.

If this is to be Sanders’ last album, and we should sincerely pray that it isn’t, then it is a fitting end to a magnificent career. For Sam Shepherd, it should serve as the inspiration to take his music to a whole new level – the approval of legends happens once in a blue moon, but collaboration with them might only happen once in a lifetime. This is a truly joyous album, and a purely pleasurable experience. Let’s hope they get around to doing a sequel.