Florence And The Machine – High As Hope 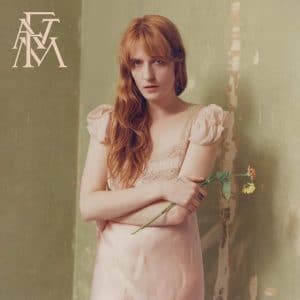 It seems like a whole different world now, those heady days of 2007 when Florence Welch and her Machine started to break through. Excitable early gigs, an appearance at SxSW which ended up with her diving straight into an ornamental pond and scrappy, knockabout and exhilarating songs like the (now rather problematic) Kiss With A Fist.

Since then, Welch has slowly become one of the biggest stars on the planet, breaking America and filling stadiums the world over. However, success had seemed to rob her of that indefinable something that made her early days so special. The bigger the sound, the more anonymous the songs, and while albums like How Big How Beautiful How Blue sounded enormous, there wasn’t too much in the form of memorable tunes.

High As Hope is Welch’s fourth album, and there’s a wistful, more intimate air to her music this time around. The bombast is still there, but it’s mostly held in check this time, thanks to a production helmed by Welch herself and Lana Del Rey collaborator Emile Haynie. Lyrically, there’s a look back to the wilder times of her 20s, with various songs addressed to family members and recollecting the booze-soaked, drug-taking times of her early days. It sometimes feels like a therapy session set to music, but it’s no less affecting for that.

Hunger is one of the most effective beneficiaries of this new sound, a gloriously swooping number that opens with the startling line of “At 17, I started to starve myself, I thought that love was a kind of emptiness”. The autobiographical lyrics add to the song’s vulnerability as Welch sings of trying to find love in drugs and on a stage before finding herself “alone, picking it apart and staring at your phone”.

This more minimal approach is beautifully demonstrated on Sky Full Of Song, which is just Welch’s voice, some backing vocals and some quiet instrumentation floating behind her. It shows off her vocals to their very best effect, and when she sings “hold me down, I’m so tired now”, you can readily believe her. South London Forever also has an emotional impact, with Welch looking back on her teenage years, namedropping Hackney LGBT pub The Joiners Arms and reminiscing about being “high on E and holding hands with someone that I just met”.

Grace is a letter of apology to her younger sister (opening with the line “I’m sorry I ruined your birthday” and becoming ever more introspective as the song goes on), while Patricia is an ode to Patti Smith, a long-term influence on Welch. Even on the less personal songs though, the arrangements are almost as impressive – the gospel-tinged, percussion-heavy 100 Years becoming one of Florence’s most intricate songs in years.

There are moments where Welch wears her influences rather too close on her sleeve – The End Of Love, although being undeniably gorgeous, is rather too reminiscent of Kate Bush‘s piano ballads – but overall, High As Hope is certainly her most impressive album since Ceremonials. And, in this age of bonus tracks and seemingly endless ‘deluxe’ versions, at just 40 minutes and 10 songs long, it never overstays its welcome. If this new, compact, less overblown Machine shows what Florence Welch is capable of, may it run for another 10 years.