Florence And The Machine – How Big How Blue How Beautiful

by Max Raymond
published: 29 May 2015 in Album Reviews
Tweet 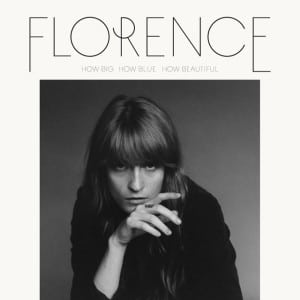 The mass critical and commercial hysteria that greeted Florence And The Machine‘s arrival feels like a long time ago, a time when Florence Welch heralded the end of dog days. With Lungs and Ceremonials, she had crafted her own sound that has sparked many imitators since; whilst her earlier material had a bit more vim and even aggression (see Kiss With A Fist), her music has gradually evolved to become more graceful and grandiose, with sweeping orchestral flourishes in all directions. Both of these records contain plenty of impressive moments, not to mention mega hits galore, but they were also flawed, and the sheer enormity of it all could sometimes get a bit much.

Three-and-a-half long years have passed since Ceremonials, which makes a third album hotly anticipated. Produced by Markus Dravs for the most part, and with Goldfrapp‘s Will Gregory helping out with brass arrangements, How Big How Blue How Beautiful has been described by Welch as a more personal record and one that’s more grounded in reality than fantasy. It’s also a work made by an artist clearly reinvigorated.

Whilst the title might seem on the surface like an apt description of the 11-track album, the truth is a little more complicated than that. Sonically, it’s easily her most varied album. The songs range from bluesy to gospel to rocky to quiet balladry. The great thing is that it doesn’t come across as disjointed – in fact, it’s a very well-crafted body of work.

It sounds as massive as anything else she’s done before, but this is a collection with plenty of substance,  illustrated nicely by the shifts in dynamics. There are still a few mini-epics – see the Motown stomp of Queen Of Peace, the swirling Mother or the celebratory title track with an extended brass fanfare for an outro – but they don’t seem too jarring when placed with the driving Ship To Wreck and the upbeat-in-capital-letters Third Eye. At this point in her career, Florence has proven to be adept at building tension; you just know that the quiet opening of What Kind Of Man will give way to something spectacular and, once the banging drum that kicks in, it doesn’t disappoint.

Her vocal performances are as stellar and unique as ever, and they are the true heart and soul of this record. Nowhere is that more evident than on the softer moments; against the backdrop of yearning strings and mournfully plucked electric guitar, she is at her most compelling. Elsewhere, she sounds more defiant on What Kind Of Man, and the sheer joy and energy of Third Eye is infectious.

On How Big How Blue How Beautiful, Welch refines a successful formula in a way that plays to her strengths without it being too familiar. Despite trying out new things, the songs remain huge – the kind of power that is only truly effective when pumped out to thousands of people in a field somewhere. It makes for her best album to date, with some of the catchiest hooks and melodies she’s ever conjured up. How brilliant.