Florence And The Machine – Lungs 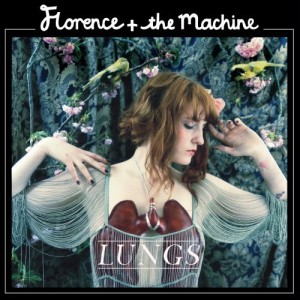 Chances are you’ve heard about all the polls, predictions and plaudits. You probably saw the awkward, almost embarrassed acceptance speech at this years BRITs (whilst collecting the Critics’ Choice award). But what about the music Florence And The Machine make? Like Antony And The Johnsons or Marina And The Diamonds, Florence And The Machine are made up of one central figure (in this case Florence Welch) and an evolving support cast.

Unlike her peers and fellow big hopes for 2009 – La Roux, Little Boots, Frankmusik et al – Welch prefers the thrum of a harp to the blast of a synth, prefers her drums to echo loudly and vibrantly not bounce around excitedly in the background. There’s also that voice, an instrument that roars and swoops on a whim, mutating from hushed reverie to pagan howl in an instant.

This alluring cacophony of sound is both the album’s initial weakness and enduring strength. On first listen it’s easy to feel bombarded and bullied by the songs. Drums crash, strings flutter, pianos flurry whilst the tempo dives off in all different directions. It’s sometimes hard to make out a verse from a chorus, or even if there is a verse or chorus, but after repeated listens the intricate melodies begin to eke out and songs gather shape.

First single and album opener Dog Days Are Over is a good example. Beginning with delicate harp and Welch’s voice in soft mode it slowly builds, piling in handclaps, huge drums and choral backing vocals only to suddenly drop completely to leave just a desolate piano. It’s little wonder radio has yet to embrace her.

Luckily, new single Rabbit Heart (Raise It Up) should change all that. Again it uses harp (as do most songs here), this time to flesh out a catchy melody that explodes into a joyful, exuberant chorus about King Midas.

Elsewhere, Drumming features a brilliantly realised intro, with various drum sounds bouncing around from left to right before morphing into another almighty chorus that melts into a tender middle eight. It’s an album that never settles or relaxes; the cycle of tension being ratcheted up and released is repeated over and over. Cosmic Love and Howl both feature frantic, pulsating drums that threaten to, but never do, overpower the melody, Welch’s voice swirling wildly in amongst the tornado.

The appearance of 2008’s Kiss With A Fist comes as light relief mid-album, its skeletal blues stomp left unchanged from its original incarnation. This is followed by Girl With One Eye, another early recording, its gothic, green-eyed lyrics bolstered by a production revamp that includes an almighty crescendo.

Lyrically, Lungs finds Welch side-stepping mundane descriptions of the everyday in favour of flights of fancy. Love is something wrenched from between two lungs, or buried deep in the ground (My Boy Builds Coffins). Blinding comes across as some kind of stream of consciousness, nonsensical lyrics spewing out over mariachi drums, “Snow White stitching up your circuit board”. Anyone?

Even when she talks about herself directly, as on the catchy Hurricane Drunk, everything’s taken to the extreme, “I’m going out, I’m going to drink myself to death… I brace myself because I know it’s going to hurt”.

Lungs inevitably arrives with a weight of expectation bearing down on it. Factor in that it’s not exactly an immediate listen and you have the recipe for what some will refer to as a disappointment.

It’s not. It’s a bold, inventive record that bristles with energy and passion. That this sense of enthusiasm isn’t always contained within anything resembling a tune or a melody is a minor pitfall and one that is forgiven on repeated listens. Whatever your feelings after the first listen, dispel them and give it a second chance. There are gems to be found – it just takes some commitment to mine them.