by Sam Shepherd
published: 2 May 2017 in Album Reviews
Tweet 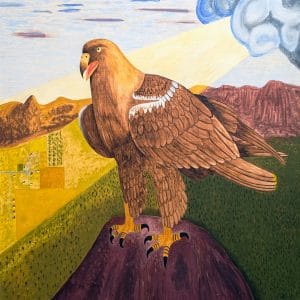 It’s that time of year again when the sun is starting to make an appearance, the smell of freshly mown lawns hangs in the air alongside the whiff of barbeques, the sound of honking thanks to barbeque related food poisoning and of course there’s the threat of rain for good measure. At some point between now and the coming of autumn it’s advisable to find a field in which to build a massive bonfire, and then under the influence of whatever takes your fancy you can prance about like a modern day shaman with no shame (disrobing is entirely up to you).

Should you be entirely law abiding in your choice of prancing catalyst, you could do a lot worse than explore six-piece Flowers Must Die’s psychedelic freak-outs. Kompost is rammed with soaring invocations to dance like you’re in search of a higher state of consciousness, but that doesn’t mean that they’ve completely forgotten to include a few tunes along the way.

The hypnotic thrum of Källa Till Ovisshet gets things under way in relatively low key fashion. The drums take a while to kick into life preferring to skitter around under a wall of phased guitars. Once the beat is established, Flowers Must Die set about creating a brief but addictive groove. It’s a groove that could perhaps have done with further exploration, you’ve got to get into it before you get out of it (to bend a phrase), and there’s not quite enough time to get into it.

Such concerns are somewhat churlish however, because from this scene setting opening, Flowers Must Die throw open the doors to the Cosmic Disco and really set about getting the party started. Next up is Hit, which takes The Funk and passes it through a Hawkwind filter. Lisa Ekelund’s vocal incantations hang in the ether, sounding like Björk aboard George Clinton’s Mothership. She might be saying something important, but it barely registers. Her voice simply provides a human element to the controlled chaos the band conjures up, it’s the connection that these songs need to truly resonate. After Gong follows. Whether it’s a homage to Steve Hillage and his cohorts is anyone’s guess, but that guitar run is mere steps away from developing into The Glorious Om Riff. It’s glorious enough as it is, and by now Flowers Must Die are most definitely on the up.

Having established a distinctly chilled out vibe, Why? consolidates the band’s position by heading off into the nearest desert (a sandpit will do if you don’t have a desert to hand) to stare into the distance and uncover the meaning of human existence. Sparse arrangements slowly morph and change shape, vocal mantras take hold and drift off, woodwind soars and dives, and those guitars become more ferocious as the song evolves. It’s possible the meaning of human existence is to build scary sandcastles. At the close of the album Sven’s Song performs a similar trick, only this time instead of a desert, they’ve taken a trip into outer space with an incredibly tired Peter Frampton.

Importantly, Flowers Must Die realise it’s not all about finding yourself, or god, or nothing, in extended freakouts. Sometimes you just need to cut a rug and enjoy yourself. To that end, Don’t You Leave Me is perhaps the song that’s most direct about its intentions. Taking Donna Summer as a starting point it’s an unashamed Disco wigout, and those disco wigs can get pretty big. Not only can you feel love seeping from the speakers, but a whole lot of squelchy disco infused psych-rock. Its inclusion here is purely to engage those dancing feet and clear any glassy eyes created by the likes of Why? Having boogied through the cosmos, they head back into space-rock territory with Hey Shut Up. It’s not quite as invigorating as their funky incarnation, but everyone needs to come down after a while. If you’re in possession of this album, it won’t take long to get back up again.

Flowers Must Die MP3s or CDs

Flowers Must Die on Spotify