Flying Lotus – Until The Quiet Comes

by Thomas May
published: 1 Oct 2012 in Album Reviews
Tweet 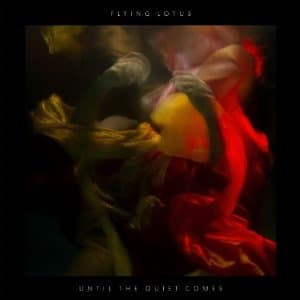 Following a work as audacious and seemingly career defining as 2010’s Cosmogramma must be something of a daunting prospect. A self-professed “space opera” traversing an array of genres from post-dubstep to hip-hop to free jazz, everything about Flying Lotus’ last full length was ambitious, sensorially overwhelming and relentlessly cerebral. It is unsurprising then that Steven Ellison, the musician behind the Flying Lotus moniker, has described his new album in decidedly more modest terms: “a collage of mystical states, dreams, sleep and lullabies”. Yet, whilst its contrapuntal web of synths and fragile, jazz-inflected guitars is certainly less imposing than the sonic barrage of his last album, Until The Quiet Comes is like a chamber concerto to Cosmogramma’s symphony: the diminution of scope does not entail a lack of ambition or complexity, only an increased sense of space and separation within the still rather formidable music.

With Cosmogramma, Flying Lotus became one of the first musicians to convincingly address the internet as a central theme in his work. Where many of his contemporaries were trying in vain to fit ageing forms into new contexts (releasing only singles or pay-what-you-like albums), Ellison utilised the novel modes of cultural perception shaped by the information age as a framework in which he could rework, and completely reimagine, his music. As Simon Reynolds has said, there is something “quintessentially webby” about Flying Lotus’ work: proceeding as a series of disjointed miniatures, each with its own distinct rhythmic and timbral character, Ellison’s albums generate the same uneasy disorientation created by the labyrinthine hyper-connectivity of contemporary forms of consumption and communication.

Throughout his work, Ellison severs musical signifiers from their original context, enacting the same instantaneous temporal and spatial flattening experienced on entry to the hyperlinked world of the blogosphere. Dusty samples of stately piano chords brush up against warped hip-hop beats and wonky, rasping synths counterpoint spectral vocal samples. On Until The Quiet Comes, Ellison continues to examine the new forms of heightened perception growing out of an increasingly interconnected world: unrelated sonic artefacts are cast adrift amidst a fragmentary collage of sound until all sense of connotation is negated, culminating in a bewildering hyper-reality saturated with information yet devoid of external meaning.

Despite the album’s pervasive restlessness, Until The Quiet Comes remains strikingly lucid. With an unprecedented melodic disposition and busy yet rarely cluttered arrangements, this album possesses remarkable poise and balance in the face of its fearsome complexity. A handful of sonic fingerprints remain constant throughout the album’s progression, bestowing a considerable sense of cohesion and logic where by rights there should be only chaos and confusion: Ellison’s meandering bass lines snake through the music in seductive spirals and his trademark stuttering beats (by now only hinting at the great J Dilla, whose influence once dominated his work) form the nuclei around which all other musical threads erratically revolve. Although Ellison’s music is, above all, characterised by a refusal to settle on any one idea for long, Until The Quiet Comes seems more like a collection of perspectives on a coherent musical identity than an atomised selection of completely disparate tracks.

Until The Quiet Comes conforms to its own internal logic. Tracks shudder to a halt midway through their development only to return as mutated shadows of their former selves and continually jarring juxtapositions of disparate stylistic features punctuate the album’s progression. As such, despite its tenuous affiliations with experimental hip-hop and post-dubstep, this record situates itself within an entirely unique creative world. With this record, Flying Lotus has continued his explorations of the outer regions of sonic experience whilst simultaneously creating a playful, and thrillingly visceral, listening experience: this music speaks as much to the body as it does to the mind. Until The Quiet Comes is at once iridescent and ambiguous, luminous and impenetrable: an elegantly conceived and executed album which may well come to be seen as Flying Lotus’ finest work to date.