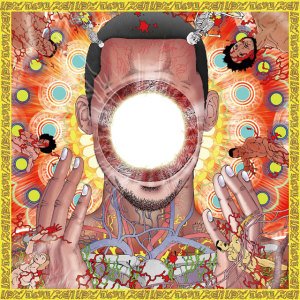 Steven Ellison has never been one to shy away from an ambitious task. His fifth full length album as Flying Lotus finds him concocting a musical imagining of the afterlife. A relative of Alice Coltrane, Ellison has long eagerly embraced the pan-spiritualism and affinity with the transcendent that fuelled his great Aunt’s music. Until now, Cosmogramma may have been his most confident elucidation of that philosophy. You’re Dead! comes with a psychedelic sense of adventure (Ellison clearly views death as a new beginning rather than an end) and, as its title perhaps suggests, a palpable sense of the absurd and the surreal.

Flying Lotus’ previous album, Until The Quiet Comes, although still packed with madcap ideas, felt more focused, with a noticeable coherence in sound and mood. You’re Dead! seems to mark a return to more scattershot and unpredictable terrain, as well as being punctuated by blasts of what might be considered FlyLo’s noisiest material to date. It’s also his album most closely connected with his improvising lineage. There are swirling Fender Rhodes keyboards that hint at Miles Davis’ Bitches Brew and In A Silent Way, bursts of guitar shredding that might invoke memories of Mahavishnu Orchestra or even Allan Holdsworth, and plenty of very real-sounding brushed drums and elegant cymbal patter.

It is not just a retread of classic tropes for a new audience, however. There is something new and exciting in Ellison’s bewildering synthesis, and something very original in his seemingly unlimited horizons. The surrealist fantasia of Never Catch Me, which features an appropriately split personality performance from Kendrick Lamar, provides a neat route in, but the album really demands to be digested as a whole.

In addition to the much hyped guest appearances (Kendrick Lamar, Snoop Dogg, jazz legend Herbie Hancock and Angel Deradoorian), regular FlyLo collaborator Thundercat is also back in action here. In fact, he arguably provides the most significant contribution to this album’s sound. His bass underpins everything, sometimes providing hooks, at others it is a source of texture and colour. His occasional flights of fancy are magnificently articulate and agile.

Importantly, Ellison has also balanced his wayward digressions and compelling sound worlds with a greater attention to harmony and melody. The dazzling, virtuoso quickfire lines are present and correct, but there are also moments of clarity and directness that have just as weighty an impact. There are also some beautiful vertical arrangements, not least the array of voices on Coronus, The Terminator. Whilst Ellison has made effective use of the voice before (not least beautiful contributions from Thom Yorke and Erykah Badu), here the vocals feel carefully integrated within a wider framework.

The fact that Ellison squeezes 19 tracks into a brutally concise 38 minutes gives some indication of how wide ranging and tempestuous it is. At times it is wildly celebratory but it veers very suddenly into abrasive and radical territory. There is also plenty of mischievous humour too – not least in the Snoop featuring Dead Man’s Tetris, on which Ellison’s rapping alter ego Captain Murphy also gets something of a workout. Yet Ellison still finds moments for blissful calm and acceptance. The overarching idea of death is of something that looms large and might be terrifying but which will, ultimately, be something magical – an experience more meaningful and complete than our earthly lives.