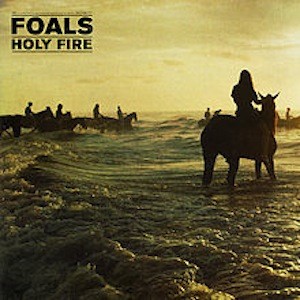 The evolution of Foals has been fascinating to watch. Crashing into our lives six years ago with clattering math-rock gems like Hummer and Balloon, their debut album Antidotes didn’t quite live up to the hype. Two years later, the follow up Total Life Forever marked a totally different sound (and one of the tracks of the year in Spanish Sahara) but there was still something missing that stopped Foals from completely fulfilling their early promise.

Not any more. Holy Fire is, only one month into the year, comfortably a contender for one of the best albums of 2013 – a thrilling mesh of everything that’s made Foals such an exciting, yet till now, frustrating prospect: at times comfortably, confidently poppy, coolly reflective and intimate at others, and presided over by those doyens of stadium rock Flood & Alan Moulder who frame Yannis Philippakis’ songs in a sound so huge and expansive that it almost takes the breath away.

There will, of course, be those who treat the involvement of Moulder & Flood with some trepidation. After all, ‘indie’ bands who aspire to fill stadiums inevitably end up losing whatever it was that made them special on the first place. On Holy Fire there, the bombast never threatens to overwhelm, and the songs never slip into blandness. Much of this is down to Philippakis’ expressive vocals – be it the anguished yearning of the brilliant Bad Habit or the frenzied screaming of Inhaler, each track is given an added dimension just by Philippakis’ presence.

Most importantly though, Holy Fire appears to be the album where Foals embrace pop music. The aforementioned Inhaler is not just ridiculously funky but also monstrously heavy, sounding almost like Montreal performing a Led Zeppelin cover. That’s followed by the gloriously uplifting rush of My Number, a song destined to provoke frenzied frugging on indie dancefloors up and down the land, and later on, the frantic intensity of Providence, maybe the most explicit nod on the album to Foals’ math-rock origins.

As on Total Life Forever, they also know how when to rein things in as well. Bad Habit is a terrific lovelorn ballad, and the stand-out Milk & Black Spiders could be the best thing they’ve ever done. The latter builds up beautifully, with simple but effective lyrics about “you’re the only one I need” before suddenly exploding into such a climax that you can almost see the colours fly out of the speakers. This will be many people’s summer festival highlight.

Even the tracks that sound a bit phoned in reveal more layers in repeated listening. Initially, Moon sounds like a bit of an anti-climax to such a terrific album, but actually makes for the perfect, chilled-out, closer while Out Of The Woods – initially slightly ‘by the numbers’ – actually has a beautifully melancholic ache to it which fits in nicely with the overall atmosphere of the album. Only really Everytime and possibly the opening Prelude could be skipped over, and even the latter manages to skillfully weave in elements of Inhaler before effortlessly segueing into it.

There will always be the hardcore fan who’ll resent Foals for not producing Antidotes Part 2, and there may be some who could be put off by a blatant grab for the hearts of Arena audiences. Those people will be missing out though as Holy Fire is the sound of a band utterly on form and completely on top of their game.