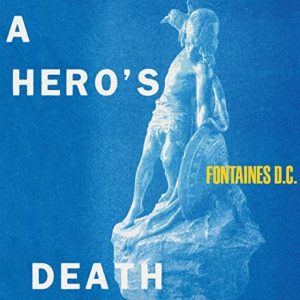 It’s hard to think of an indie act that’s experienced a more astronomical rise to prominence over the last 12 months than Fontaines DC.

The Dubliners’ urgent, exhilarating debut album Dogrel quickly turned the five-piece from small-town punk poets into BBC 6 Music darlings and Mercury Prize nominees, leading to a slew of sold-out tour dates across the globe. And, inevitably, the pressure took its toll.

Overwhelmed by the new-found attention, exhausted from their punishing schedule and on the brink of booze-fuelled self-destruction, the band scrapped an entire album’s worth of material recorded in Los Angeles and headed to humble South London to start from scratch. The result – A Hero’s Death – is, thankfully, magnificent.

With more plaudits to their name than most acts of their ilk could dream of, it would have been so easy for Fontaines DC to keep delivering more of the same rabble-rousing brilliance. But from the outset, it’s clear that the beloved post-punkers aren’t attempting to recreate the defiant first LP that brought them so much praise a little over a year ago. This time, they’re laying their feelings bare for the world to see.

In stark contrast to Dogrel’s raucous, anthemic opener Big, first track I Don’t Belong is sombre and sparse, with vocalist Grian Chatten’s drawling refrain echoing despondently over a driving, Peter Hook-inspired bassline. “I don’t belong to anyone,” Chatten declares repeatedly, setting the tone for the self-interrogation that’s to come.

The textured, atmospheric Love Is The Main Thing only builds on the darkness of its predecessor. Dominated by pattering drums, droning, distorted guitars and themes of disassociation and despair, it’s a gorgeously downcast, cynical piece of work that wouldn’t feel out of place on a Nick Cave or Lou Reed record.

By the time we reach stand-out number A Lucid Dream, we’ve completely moved away from Dogrel’s modest meditations on rain-soaked Dublin life. At once chaotic and melodic and with more than a tinge of jazz, the track sees Chatten abandon his trademark canny character studies and literary references in favour of a frank exploration of his own vulnerabilities. Dissecting the inner turmoil that threatened to destroy the band in the wake of their overnight success, he roars: “You’re prone to being anyone else other than you/ They just want to come to your place and hear you sing”.

As well as familiar nods to Joy Division and The Strokes, A Hero’s Death draws from a more colourful, eclectic palette than the band’s debut (think Leonard Cohen, the Velvet Underground and the Brian Jonestown Massacre). Indeed, Chatten and his bandmates have even cited The Beach Boys as an unlikely influence on their follow-up LP. This is most evident on hazy, dream-like tracks such as Sunny and Oh Such a Spring, which hauntingly hark back to simpler times.

Shunning a tried-and-tested formula to focus on evolution and experimentation is always a massive risk. But by choosing to embrace their calmer, and often much darker side, the Dubliners could well have given us their masterpiece. Fontaines DC, succumb to difficult second album syndrome? Not a chance.