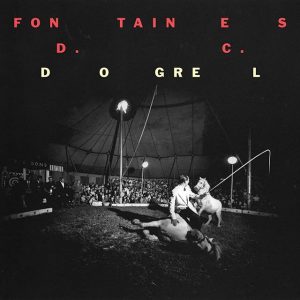 As statements of intent go, they don’t come much more blatant than the first track on Fontaines DC‘s debut album. “Dublin in the rain is mine,” snarls lead singer Grian Chatten, “my childhood was small but I’m gonna be big”. And, after listening to Dogrel a couple of times, it’s impossible to argue with.

There’s been a buzz building around Fontaines DC during their relatively short lifetime. Yet a couple of well received singles and a frenetic series of gigs don’t quite prepare you for how good Dogrel is. It’s one of those rare, once in a generation albums – think Definitely Maybe, Is This It, Whatever People Say I Am That’s What I Am Not – which swaggers in, looks at the current state of music, nods and just says: “Right. This is how we’re doing things from now on.”

Like those classic debut albums cited above, it’s not the case that Dogrel is terrifically original. Fontaines DC wear their influences close to their sleeve, with nods to The Pogues, The Strokes and Joy Division, but these influences are absorbed into their identity, to create something that instantly familiar and accessible, but also thrillingly compelling.

They’ve been described as punks, but in reality there’s a lot more going on than just a snarling attitude. There’s a poetry to much of Chatten’s lyrics, which often bring to mind the weary romanticism of Shane McGowan, especially on the closing track Dublin City Sky. The opening lines of Chequeless Reckless sound like some sort of manifesto: “A sell-out is someone who becomes a hypocrite in the name of money, an idiot is someone who lets their education do all of their thinking.” And The Lotts, graced as it is with a Peter Hook-esque bassline straight from Unknown Pleasures, has a languid air of self-loathing about it – “Sorry in the morning for the bastard I’ll become” – which becomes unexpectedly affecting.

Most vivid of all though are the characters that populate Chatten’s songs. Boys In The Better Land (already a contender for best track of the year) tells of drivers who “spits out ‘Brits out’, only smokes Carrolls” before advising that “if you’re a rockstar, pornstar, superstar, doesn’t matter what you are, get yourself a good car, get outta here” like some 21st century version of Born To Run. It’s the way that Chatten’s words just pour out of him like some kind of stream of consciousness that gives these tracks their thrilling quality: his strong Dublin-accented drawl may not be to everyone’s taste but they fit these songs like a glove.

The pace throughout the album’s 39 minutes is pretty relentless, with only Roy’s Tune in the middle of the record bringing the tempo down a notch. Yet this isn’t just heads-down bluster: there’s an aching melancholy to Television Screen, while Hurricane Laughter is Dogrel’s impossibly exciting centrepiece: racing out of the tracks like a fired up version of The Strokes‘ Juicebox, with Conor Curley unleashing bursts of fiery guitar riffs, and Chatten half-speaking, half singing lyrics like “the muted mind of priesthood so imperious” in the mould of an Irish Jonathan Richman. It’s no wonder that it’s already a highlight of their live show.

The closing Dublin City Sky is the band’s most explicit nod to The Pogues, and it is a gorgeously wistful way to end the record, a whisky-soaked ode to lost love and regret, and a song that gives an intriguing indication as to what the future direction of Fontaines DC may sound like as they evolve. There’s one thing that can be guaranteed though – as the self-prophesying opening track puts it: they’re going to be big, and one listen to Dogrel will convince you of that fact.