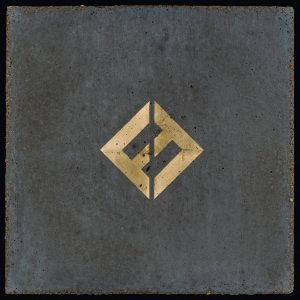 When a band has been around for as long as Foo Fighters, it’s understandable that a feeling of indifference might grow towards each new album release. Certainly, that was the case with their last effort, 2014’s Sonic Highways. A loose concept album – each song recorded in and inspired by a different city across America – their eighth LP was still pretty much Foo Fighters by numbers.

Yet despite the reassuring familiarity of their sound, they’ve shown a remarkable knack over the years for producing epic, crowd-pleasing anthems. They know what they do best, and they embrace it. This was aptly demonstrated by their long-awaited Glastonbury headline set, which saw them rattle through their huge back catalogue of greatest hits. As Dave Grohl said: “There ain’t no party like a Foo Fighters party.”

So is it a case of more of the same with Foo Fighters’ ninth studio album, Concrete and Gold? Well, yes and no. In many ways, it sees the band get back to basics – it’s the first time they have recorded a full album in a commercial studio since 2002’s One By One – but then there’s the list of contributors. You only have to look at the name Greg Kurstin (Adele, Sia and Lily Allen) on production duties to realise that this is not just any old Foos album.

Opener T-Shirt gives a hint at what’s to come. The tried-and-trusted quiet verse/loud chorus formula is still in full effect, but there is a pop sensibility lurking in the background that is present throughout most of the record. The Sky Is A Neighbourhood is another example of this, its leaner production allowing the surprisingly infectious chorus to shine, while still maintaining a meaty, blues-inflected riff.

Even when Foo Fighters remain in their comfort zone, there is a fresh vibrancy that wasn’t there with Sonic Highways. Take lead single Run, which begins with a very recognisable twinkling melody before delivering an enthralling gut-punch as Grohl goes into full scream mode. The almost six-minute runtime also allows room for one of the band’s typically escapist choruses: “In another perfect life/In another perfect light/We run.”

None of this is groundbreaking territory for Foo Fighters, but the song does possess a restless energy that defies the fact that most of the band are closing in on retirement age – something they poke fun at in the video. It almost sounds like a reawakening, which makes sense as it was the first song Grohl wrote after giving himself a year-long break from music to recuperate from his broken leg (albeit he only lasted six months).

The intensity of Run is taken to the next level by La Dee Da – with a little help from The Kills’ Alison Mosshart. Again, it appears to be a cathartic experience for Grohl as he lets loose on the full-throttle track about his political anxiety surrounding Donald Trump’s election in America (“Look out ’cause you know what you’re doing/turn up the American ruse”). This theme is not laboured – that’s not their style – but it’s present nonetheless.

Elsewhere, there’s further evidence of Foo Fighters dipping a toe into unfamiliar waters. The Taylor Hawkins-led Sunday Rain, featuring Paul McCartney on drums, is a mid-tempo rocker with a psychedelic undertone, while Make It Right and Happy Ever After (Zero Hour) deliver harmonies aplenty. Then there are heavier efforts like The Line and Dirty Water, fully embracing the collision between the extremes of hard rock and melodic pop.

For all the talk of this being their “weirdest” album, though, there is still no mistaking it for another band. The closing title track sums this up perfectly, with the much-talked about contributions from Boyz II Men member Shawn Stockman – like those from Justin Timberlake on Make It Right – barely registering. But it doesn’t matter, because subtle change is still change – and after remaining stagnant for so long, Concrete and Gold is a mini breakthrough for the Foo Fighters. Progress, at last.