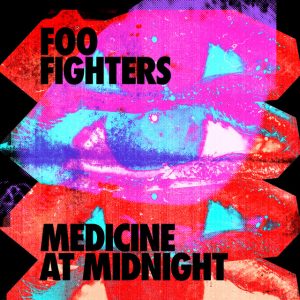 The main thing that comes to mind when one thinks of American rock band Foo Fighters is stability. You know who their name, you know their history, you know some of their hits, you know their instantly-recognisable blend of honey and grit. And that’s because they have been an omnipresent force in the music business, having been around now for just shy of 25 years.

Add to this that they’ve had largely the same line-up since 1999 (Dave Grohl, Nate Mendel, Taylor Hawkins and Chris Shiflett were rejoined by ex-member Pat Smear in 2010 and made Rami Jaffee an official member in 2017 after 12 years of service), and that they tend to work with only a handful of producers, and stability becomes the only worthwhile word to describe them and their reliably listenable rock records.

Medicine At Midnight is their 10th album, and their second in a row with Greg Kurstin (most recently seen performing some rough and ready covers of songs by Jewish musicians, with Dave Grohl, to celebrate Hanukkah). It’s also, thankfully, one of their best collections since 2005’s exhausting, exhaustive career peak In Your Honour.

What’s so great about Medicine At Midnight is its brevity, its hit-and-run approach, and its ability to never get weighed down by the endless layers of backing vocals, walls of guitars, acres of reverb or cavernous drums. It hangs together beautifully, in a way a lot of modern rock records can’t.

The band ably – nimbly – shift between the dense, overstuffed, jubilant power pop of opener Making A Fire, and the slinky, sexy thunder of Shame Shame (a highlight here, and one of the best things they’ve ever done.) The chorus of the latter is signature Grohl, with its anthemic “woah-oh”s and its soaring instrumentation – but the magic is in the serpentine slither of its verses.

Cloudspotter splits the difference between ’70s Cheap Trick and ’90s Guns N’ Roses (Kurt Cobain would be spinning… wouldn’t he?), with its choppy riffs and low-slung sleaziness. The customary acoustic strummer comes in the shape of Waiting On A War – and it’s actually rather pleasant, with its earnest lyrics and explosive crescendo. They pick up the raunchiness on the title track, which has a smooth late-era Roxy Music bounce to it, as though its groove were salvaged from an early-’80s cop drama.

Somewhat surprisingly, the second half of the album has more capital-R Riffs than you can shake a stick at. There’s the thrashy rhythm underpinning the new wave strut of album closer Love Dies Young, the leaden crunch of Holding Poison (which sounds uncannily similar to Grohl’s sometime bandmates Queens Of The Stone Age) and the much-touted early Metallica/Motörhead influence of already-released No Son Of Mine. While No Son Of Mine isn’t as immediately, viscerally thrilling as some of the metal bangers those groups put out in their early years (nothing is), it still rides its Harley into some of the same hellish terrain. They could, and probably should, have gone much, much further.

If you’re a fan, then Medicine At Midnight is essential listening, and if you’re not, you’ll probably find much here to enjoy. If, like many of us, you tend to enjoy the Foos’ oldies on the radio, and wouldn’t mind seeing them live, then there’s a lot here to get your teeth into before those hallowed days when gigs return. This is a characteristically strong, uncharacteristically sloppy (in a good way!), album by one of the few remaining shining lights of rock music. Greatness is almost a given at this stage.