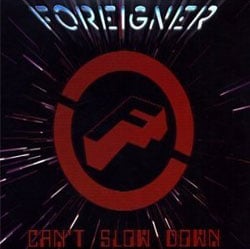 Has it really been 15 years since Foreigner recorded a studio album? It seems like we’re constantly hearing them (the old songs still get considerable airplay) or seeing them (they’re always on tour).

In the interim, Foreigner has released what seem like 24 greatest hits albums (OK, maybe just a handful) and, besides, who needs a new record when you’ve got six multi-platinum albums? Mick Jones does. The guitarist, founder and sole remaining original member has put together a new band to finally record a follow-up to 1994’s Mr Moonlight.

Can’t Slow Down may partly have been made for the thousands of NASCAR fans who watched the band perform at the Texas Motor Speedway and consequently declared themselves as fans of the band. The title track is even a tribute to the race. The melodic rock for which Foreigner is famous for is therefore in full speed and Jones has no plans to decelerate. Rock is effortless for him, especially as he doesn’t steer too far from his roots. Produced by Marti Frederiksen, who has notably worked with Aerosmith, and the omnipresent Mark Ronson even lends a hand on Fool For You Anyway, which bears a ’50s-meets-Amy Winehouse sound.

The album follows the classic Foreigner style: a mix of good ol’ rock ‘n’ roll slower beats, but the Michael Bolton-type ballads remain – thankfully – locked firmly in their back catalogue and on AM radio. However, unconditional fans of classic syrupy concoctions like Waiting For A Girl Like You and I Want To Know What Love Is will be happy with I Can’t Give Up, I’ll Be Home Tonight and When It Comes To Love. Hopeless romantics like to rock too.

But Foreigner is a rock band. The ride is smooth, like a German car, and the arrangements are clear-cut and no-nonsense. Why mess with a formula that works so well? Living In A Dream says it all and is bound to be a hit at concerts, and so will Angel Tonight with its infectious riffs. The album reprises Too Late, which features on No End In Sight: The Very Best Of Foreigner in 2008 and features Jason Bonham on drums.

Mick Jones is surrounded by some great veteran musicians, and Kelly Hansen as vocalist is an acute choice. The ex-Hurricane singer sounds quite like Lou Gramm but brings his own style into the game, and he contributed to the songwriting to boot. His voice lends itself beautifully to Foreigner’s signature style and retains a hard rock flavour for the more upbeat tracks.

While there’s no Jukebox Hero here, it’s efficient, it’s fun and still rocks. Kudos to Mick Jones for not resting on his laurels. Maybe he just can’t slow down?