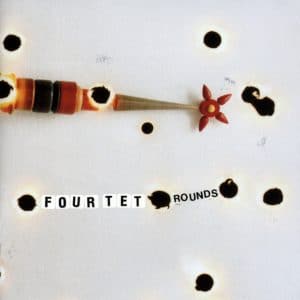 Kieran Hebden has certainly been around the block for one so young. He started playing guitar for Fridge in his mid-teens and toured with them extensively, as well as playing as Badly Drawn Boy‘s live band. Hebden’s musical head was moving on however, into more experimental territory as he began writing solo as Four Tet in the late ’90s. When his debut LP Dialogue was released in 1999 (Output), he was just 21 and yet exploring and mutating the sounds of free jazz and soul.

His interests constantly developing and embellished by the folk influences of Bert Jansch and Pentangle, he moved onto “invent” “folktronic” and was using more obscure musical forms, drawn not only from folk, but also utilising hypnotic repetitive rhythms. The follow up, Pause, was very highly sung by the music press and became Uncut Album of the Year for 2001.

Rounds, his first release for Domino Records is a beauty. It takes its name from the musical term “round”, meaning to repeat a musical theme, and this is something that Hebden employs a lot to beautiful effect on this album. First track Hands starts with a tripping-up heart beat and subtly sets the tone of the LP, bringing in a Soft Machine-esque muted, tripped-up, drum-beat-free jazz sound that lures and lulls, back flips and trances.

She Moves She starts simple drumbeat, but then interesting, Japanese sounds seep in and it hits a hook of repetitive simplicity and beauty. You get into a blissful haze, unfortunately to be shaken out of it by a distorted mobile phone like interference, which ruins the mood for me. I thought my CD player had broken! I wish it would stop so I could enjoy the mood. However, I like the vibe – it’s intriguing, even if irritates.

My Angel Rocks back and forth, employs a beauty harp – simple, fresh as dew on spring blossom, that moulds the listener into a meditative state. No interference here, just languid lucid melody. Spirit Fingers moulds a round again, with mandolin played fast and swirling, incorporating chimes and bells. It’s the underlying whoosh of tape noise that travels this on, and indeed, I want it to go on and on and on.

Unspoken is another treasure, but I’m not convinced it’s his treasure as it sound seems heavily drawn from the Tori Amos school of piano riffs. But, its lament laments me and its sadness catches with its sub-sax freeform screeches. It is a beauty.

Hebden has created a subtle piece of loveliness with this LP. The entire album lulls you into a subdued sense of pretty, and then either develops a beautiful oddness or stays with this simplicity. Whichever, its hooks hold and it doesn’t release until the last embers of its final glowing note in the final swaying track Slow Jam.

Its originality courageously heralds into the mainstream a labyrinth of musical styles seemingly pure of heart. Such simplicity is almost breathtaking, and must invite a much wider audience to his surreal inventiveness.