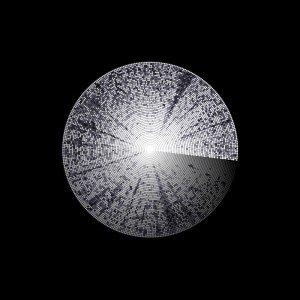 What’s your favourite Kraftwerk album? In answering that question, many will surely plump for Autobahn, Trans-Europe Express, or maybe even Computer World. It is therefore fair to assume rather less will opt for Radioactivity (or Radio-Aktivität), the group’s 1975 album that languishes a little behind its illustrious colleagues.

Being Kraftwerk, this album still has a far-reaching legacy, so much so that Franck Vigroux and Matthew Bourne teamed up to re-imagine the entire LP for a live performance, celebrating its 40th anniversary. The key word here is ‘re-imagine’, for this was no mere replay of what had gone before, more a chance for two musicians to stamp their own interpretation on the album, to take it off in different musical directions.

The resultant piece of work was well received in live performance, so the next logical step was an album. Vigroux and Bourne now bring their thoughts on Kraftwerk to bear through sounds and melodies that treat the original respectfully but use it as a jumping off point. Since Radioactivity, Voyager spacecraft have visited the outer limits of the Solar System, a natural reference point when processed versions of sounds from space are used here, courtesy of NASA.

Initially the stark textures of Radioland are not very welcoming, but as the album progresses there are bursts of warmth. The white noise of the NASA-sourced sounds bring the work of Cabaret Voltaire into the equation, as melodic loops and snatches work with and around disembodied vocal samples and snippets of analogue noise.

Yet on occasion the album retreats almost out of view, as though its gravitational pull has suddenly stopped working – and the ear strains to hear what might be next. Because of this a quiet, darkened room is the best environment in which to appreciate Radioland, for if you happen to be on public transport – even with noise cancelling headphones – the perspective will disappear altogether.

This is all indicative of the invention Vigroux and Bourne have used in their voyage down memory lane, from which can be pulled some selective highlights. The brooding introduction to Airwaves, for example, creates real tension only released by the use of the satisfying Kraftwerk loop. The exchange of vocal data at the start of The Voice Of Energy is fascinating, and a little disconcerting, while Antenna is downright sinister, a sharp metallic sound cutting through the texture like a chainsaw through a tree trunk.

One key result of this audio-only production is that a vital element of the initial Radiolands project is missing, namely the visuals by installation artist Antoine Schmitt. This would be even more of a key omission were it not for the musical quality on show, for thankfully Bourne and Vigroux create their own darkly shaded musical pictures, the blackest form of outer space a constant backdrop in the listener’s mind.

It would be fascinating to see a DVD release of their work, to see how the mind’s eye matches up with Schmitt’s thoughts, but for now we are left with a document that looks back at Kraftwerk rather like the Voyager spacecraft now look back on Earth. The quartet may be more of a dot in the distance but their presence is still very much alive in electronic music of today, and it thrives on new and imaginative interpretations such as this one.