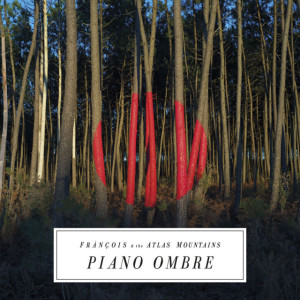 Finally, Frànçois & The Atlas Mountains fulfil the early promises of their joyous and carefree music. All it took was the decision to record in a proper studio for the first time; hunkering down near Bordeaux to craft their third album with producer Ash Workman (Metronomy/NZCA Lines) has paid off immediately.

The charming, poetic Frànçois has previously stolen hearts with his unpredictable and ramshackle combustion of beguiling lyrics – in both French and English – and his ability to slide from moody rock to high-life funk in the drop of clever cognate. In the same way that Devendra Banhart originally wooed audiences with his hippie troubadour naivete, Frànçois has also survived by his wits, making the most of limited resources and a knack for writing a damn fine pop song.

But here, Frànçois is a different beast altogether and marshals a newfound degree of sophistication out of his band and their arrangements. The album’s irresistible single, La Vérité, is a tidy three-minute slice of energetic, foot-tapping angular funk. Anchored by the propulsive backbeat of fellow countrymen and multi-instrumentalists Amaury Ranger and Pierre Loustaunau, drummer Jean Thevenin and the Glaswegian keyboardist Gerard Black, it takes more glitzy twists and turns than a high-speed drive through the streets of Monaco. It’s infectious stuff, and its retro organ squeals defy you not to head to your nearest dancefloor and let loose.

When the group want to ply you with tropical slinky pop, you are at their mercy. However, where Piano Ombre (or ‘calm down shadow’ meaning to “no longer be scared by things, because there is a way to see things in a positive light”, proffers Frànçois) succeeds is in its ability to shift gears. They follow their party-time single with the brooding six-minute The Way To The Forest, which skanks at half-speed through a obtuse tale of finding yourself by confronting your shadow in the woods.

And don’t think this is just the fanciful frippery of a charlatan – watch the YouTube video of how the cover artwork was made and see Frànçois and the guys spending an entire evening erecting a tower to illuminate the cluster of trees they find the most ‘sexy’ before adorning them in a red circle of spray paint. These acts of symbolism and vandalism are given great consideration, if nothing else.

Written in the south west of France, where Frànçois lives once again after waving goodbye to his adopted home of Bristol, it was apparently created during a difficult time in his life. The torchsong of La Vie Dure (a hard life) is a bittersweet, loose Vampire Weekend-esque ditty that is disarmingly sweet, while also serving as an apt soundtrack to flicking through Frànçois’ watercolour-laden journals where he depicts a sick mother in hospital, a long sleep after a recording session and a trip to Africa. And while the effect may be to impart a degree of weariness in the otherwise cheery Frànçois, the music never comes off as jaded. Instead, it is consistently fresh, inventive and beguiling, showing a band surely at the summit of their powers.

Frànçois & The Atlas Mountains on Spotify