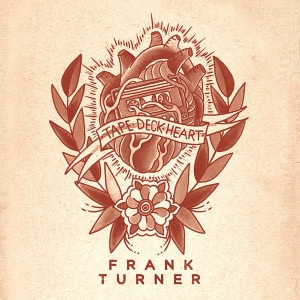 Frank Turner is in reflective mood. Losing Days, complete with the mandolin from REM‘s Losing My Religion, sings of those days that once lasted a lifetime now lost “in the blinking of an eye”. Good And Gone puts the blame for romanticising excess at the door of Motley Crüe, of all people. And Polaroid Picture mourns the closure of the London Astoria to make way for Crossrail, and bemoans new singalongs in “rooms we don’t know on the other side of the city”.

And in those vignettes lie the strengths and weaknesses of Tape Deck Heart. When he deals in the small-scale dramas of relationships, friendships, and ruined dreams, his honesty is affecting and at times almost embarrassingly candid, like seeing a teacher crying. But Frank, if you want to know about new music venues, why not get on the bloody tube and visit them? It’s just a bit strange to see a man who forged a successful solo career by almost completely abandoning Million Dead‘s hardcore origins allowing himself to slip into such reactionary nostalgia.

It’s not just a throwaway line, either. Four Simple Words complains of music made by “lacklustre scenesters from Shoreditch”. Who? Can Frank name a single band that actually fits that literal description? It’s just a shortcut, a code for any music that doesn’t fit into his vision for the ideal rock band. And the problem is, his contemporaries, that cadre of honest rockers, failed. Hundred Reasons, Funeral For A Friend, Reuben – you name it, they all fell by the wayside, and they have no-one – not even hipsters or East Londoners – to blame but themselves. They blew it, that scene is dead – it’s time to move on.

Luckily, Frank’s ability to churn out a stirring chorus remains undiminished, with Recovery, Plain Sailing Weather, and Losing Days standing out as obvious crowd pleasers, and managing to overcome the slightly bland job über-producer Rich Costey has done on the album. A less inventive and experimental record than England Take My Bones, it takes more than a couple of listens for it to fully sink in, but there are some accomplished and even inspired tunes here.

Touted as a break-up record, it’s the tales of personal anguish that hit the emotional bullseye. “Sleep gets tiring, and dark reminds me of dying” is the unflinching confession of Plain Sailing Weather, while Anymore will hit many a raw nerve with its finely detailed account of the end of the affair, offering the listener a seat beside the deathbed of love: “The single hardest thing I ever had to do was take your arms from round me and walk away from you.” It’s all a little depressing, and it needs album opener Recovery, all jaunty Levellers folk-rock, to offer a more optimistic take and search for “a long way back to the light”.

Long and short, it’s hit and miss. Fisher King Blues’ use of the Arthurian myth of the King with a wound in his groin, neatly placing him in Battersea’s broken power station, is a powerful symbol for his and our own faults and frailties – whereas the comparison between scars and relationships on Tell Tale Signs, strung out over three verses, stretches that metaphor beyond breaking point. It’s a puzzlingly downbeat album to release, too, just when Frank Turner’s public profile has never been higher. But his usual mix of gruff conviction and increasingly confident songwriting should ensure his popularity stays – for now – at its current peak.