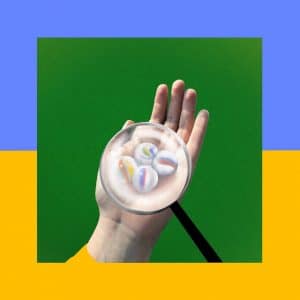 Close It Quietly is the fourth studio album, and second through Sub Pop, by Frankie Cosmos, stage alias of Greta Kline.

It’s an album with a real Nick Cave-esque album opening punch of a lyric “The world is crumbling and I don’t have much to say”. This gives a sense that what is coming next is perhaps an album that may have minimal lyrical impact – but this is wrong. Kline is an excellent lyricist who has a very clear view of what she is trying to say. At a time when emotions and feelings of seemingly everyone are running high, Kline manages to phrase joy, sadness, despair and optimism better than most.

There are a series of standout songs within the album. Windows is the first standout track. It has a simple drum beat, heavy guitar chords and vocals of great reflection and transparency. Self Destruct is one of the simplest songs, just Kline and an acoustic guitar and without close attention you might think is ‘just’ a folk song. Yet dig a little deeper in the lyrics however and you get a true sense of the power of the words: “Way up high and fucked, not violent enough to self destruct, but I want to stop being in this life”. It’s a simple tune but with an incredible level of despair in the lyrics.

This is followed by Wannago, simple in its arrangement but again emotionally evocative. This theme carries on through the album, with closer The Swirling having a repeated mantra of “I will die crying, I will cry dying, I will try crying, I will cry trying” and suddenly you realise that the album has managed to close with the same intensity in started with.

As a whole the album musically has a real innocence about it, with a similar feel to works by acts such as Girlpool and Snail Mail, but also evokes similar feelings to those forthcoming from older releases by The Lemonheads, Half Japanese and Teenage Fanclub. There is a delicacy as a whole, aided by the fact that it is a collection of short songs. When you realise that the album has 21 songs over only 39 minutes there could be an initial worry that the songs could be so short that there is almost a novelty feel or that songs don’t manage to leave the listener fulfilled. This is absolutely not the case. Although the album is largely bright optimistic sounding indie pop there is enough musical and lyrical diversity in how each song feels that it does not feel like 21 versions of the same song.

It’s a real skill to make what is essentially pop music that also manages to combine depth in lyrics and cheerful tunes, and on this album Frankie Cosmos absolutely excel.