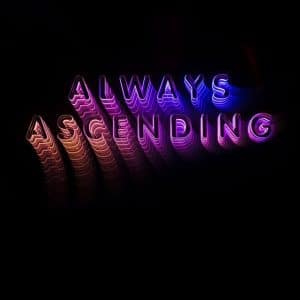 It is actually something of a surprise that Franz Ferdinand‘s fifth album isn’t titled Last Men Standing. For they, after all, appear to be the remaining survivors of the new wave of guitar music that they helped to usher in when they appeared in 2003. The Futureheads long ago split up, as did The Rakes, while The Young Knives seem to have settled into ‘indefinite hiatus’ status. Even Bloc Party were last seen baffling all and sundry with a rather subdued gospel-inspired album.

Ever since Take Me Out exploded onto the scene though, Franz have just kept on keeping on. It’s undeniable though that their most recent work seems to have been a case of the law of diminishing returns kicking into effect – while later albums like Tonight: Franz Ferdinand and Right Words Right Thoughts Right Actions had their moments, there was certainly an awful lot of filler on both of the records.

In the last couple of years though, Franz’s mojo appears to have been revitalized. It could have been down to the successful collaboration with Sparks, FFS, or it could even been the enforced line-up that Nick McCarthy’s departure in 2016 prompted (both Julian Corrie and Dino Bardot have replaced the guitarist, turning the band into a five-piece). Whatever the cause, there’s a new swagger to Always Ascending, the sound of a band refreshed, revitalized and ready to take on all-comers once again.

McCarthy’s departure hasn’t resulted in any radical change of sound though – this is very much a recognisable Franz Ferdinand album, from Alex Kapranos’ arch lyrical couplets to the naggingly infectious choruses. There’s a higher reliance on synths than before (presumably due to the arrival of Corrie, who has recorded several electronica albums in his guise as Miaoux Miaoux) and this helps to raise the likes of the title track and Paper Cages to a level above the normal indie-pop shoutalong songs.

Lazy Boy is also a tremendous amount of fun, with a call and response chorus of “Am I going to get up? NEVER!”, while Huck And Jim is the best thing that the band’s done in ages, with its traditionally weird time signature changes and lyrics about sipping ’40s with Huckleberry Finn and Jim while cheering the virtues of British institutions like the NHS and the DSS. Lois Lane, meanwhile, finishes with “at the over-30s singles nights, it’s bleak, it’s bleak, it’s bleak” which is then followed by a pay off line of “see you next week?”, which pulls off the tricky job of making you laugh and also feel quite sorry for the protagonist.

Lois Lane is one of the tracks that best show off new producer Philippe Zdar’s influence on the album – contrasting with those sardonic lyrics, it’s slick, sleek and very reminiscent of Zdar’s work with bands like Phoenix. It’s a comfortable fit for the band, taking in familiar influences such as David Bowie, and as such Always Ascending sounds quite the natural evolution, rather than anything too jarring.

There’s the odd track that doesn’t quite work – The Academy Award is a rather too languid ballad that seems to slow down the flow of the album, and closing track Slow Don’t Kill Me Now makes for a weirdly unremarkable and flat end to the record. Overall though, it’s a joy to hear the band sound inspired again, and it’s good to see that, after all these years, Franz Ferdinand are still a force to be reckoned with.