Frazey Ford – U Kin B The Sun 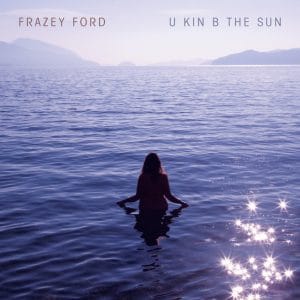 Formerly part of roots folk group Be Good Tanyas, Frazey Ford has been on a surprising and intriguing musical journey over the past few years. Recording with the legendary Hi Records session band for her previous album (2014’s Indian Ocean), Ford embraced a deep soul sound that offered a fresh and empathetic context for her distinctive, tremulous voice and her emotionally nuanced, songwriting.

Now working with her regular Vancouver based touring band (Darren Parris on bass, Leon Power on drums, Craig McCaul on lead guitar and Caroline Ballhorn on backing vocals with the ever in demand Phil Cook guesting on keys), Ford has retained the effortlessly grooving feel of Indian Ocean whilst also crafting a greater sense of freedom, elevating her songs yet further.

The music on U Kin B The Sun feels natural, relaxed and lithe but it reveals exquisite details and riches on repeated listens. Parris’ bass lines are perfectly placed and agile, whilst the intricate tapestry of ghost notes in Leon Power’s drumming adds depth to the grooves. Cook’s contributions on keys frequently make the songs feel more intense and transcendent, reminiscent of his excellent work for Hiss Golden Messenger. These arrangements may be less lavish than those on Indian Ocean, but they still pack considerable power. Ford has expressed that the sound of the album was partly achieved through improvisation, and there is a real sense of collective music making at the heart of U Kin B The Sun.

All this would not work without the rich quality of Ford’s songwriting, which is not only compelling in its narrative but also comes with an almost mystical quality. Ford appears to be equally at home exploring the stridently political or the deeply personal. The Kids Are Having None Of It takes the Parkland High gun control campaigners as its immediate inspiration (“they can’t be bought”) but also responds more broadly to contemporary western politics. The brilliant opener Azad addresses Ford’s background in communes as part of a restless, hippy family.

Many of the songs seem to gracefully expand as they progress. Sometimes there are distinct verses and choruses, but the overall effect is still somehow more linear, making the song structures feel longer and more detailed. Ford’s vocal will often begin somewhat understated but reach out into the foreground later in the song. U and Me has a remarkable range of emotion and sound. Sometimes her vocal affectations, whilst seemingly honest and emotional, do make it hard to discern exactly what her lyrics are, which can be a small barrier to communication (albeit one amply compensated for by Ford’s many other qualities).

Whilst the songs can feel painful and direct, there’s also a sense of euphoria and celebration here too, and the overall sense is one of healing and catharsis. This is Frazey Ford’s best album to date but it really feels like she is just getting started.