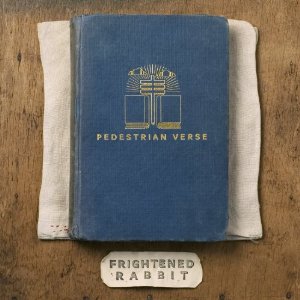 It’s a good time for Scottish folk. While artists like Alasdair Roberts and Idlewild’s Roddy Woomble have become dependable perennials, the past few years has seen a surge of new bands such as Admiral Fallow and The Twilight Sad winning hearts and minds with their own emotional take on folk-rock.

Selkirk’s Frightened Rabbit have been the standard-bearers for this ‘movement’, rapidly acquiring a devoted following with their three albums to date. 2010’s polished The Winter Of Mixed Drinks threatened to break them to a mass audience, enjoying widespread critical acclaim and even charting in the American Billboard 200. It’s perhaps unsurprising, then, that its aftermath saw the band signing to their first major label, Atlantic.

If this raises the spectre of a band chasing wider popularity, it’s quickly clear that Pedestrian Verse is far removed from any misguided notions of ‘selling out’ which could be thrown their way. Frontman Scott Hutchison retains his distinctive and amiable Scottish drawl and any fears that he would dilute his often dark lyrics are blown away by the album’s opening line, delivered in a deceptively-pure falsetto: ““I am that dickhead in the kitchen.” It’s a funny, arresting introduction to an album littered with broken people, disintegrating relationships, drunken arguments and crippling dysfunction.

The remarkable thing is that this grim misery is skilfully and appealingly delivered with wit and affection – these are not tales of woe to be pitied but rather testimonies to the strength to be found in our shared inadequacies. In immediately identifying himself as the target of his ire Hutchison brilliantly makes the misanthropy of the opening Act Of Man (featuring brutal lines like “Man – he breeds although he shouldn’t/He’s breeding just because he cums”) not only palatable but sympathetic. There is no superiority here at all but rather identification – “I am just like all the rest of them/Sorry, selfish, trying to improve”. This message is all the more conspicuous for being carried on the back of a sky-scraping musical backdrop which ticks all the boxes of a ‘stadium anthem’ (including guitar which heavily recalls U2) while avoiding the hollow bombast which that phrase implies.

This blend of wry, poetic lyrics with music which suggests prime-time radio is common on the album, yet it’s confident and accomplished where it could so easily have been self-conscious. Backyard Skulls and Holy race along on mercurial melodies and the post-punk thrill of the latter (where Hutchison rejoices in his flaws, declaring “thank God I’m full of holes”) highlights an outstanding band. The rhythm section of Billy Kennedy and Grant Hutchison make the tender ‘you and me versus the world’ take of The Woodpile a swaggering, addictive highlight while Late March, Death March is the kind of air-punching anthem Coldplay would kill for (albeit with the kind of beer-stained lyrics which Chris Martin could never muster).

The album’s bleakest moment comes in State Hospital, already familiar as the title track of the band’s 2012 EP. Here Hutchison powerfully and economically tells the tale of a woman “born into a grave” who “cries in the high street just to be heard”. Yet even this seemingly unremitting gloom is tinged with the hope of redemption, ending with the repeated prayer that “all is not lost”. No song better highlights Frightened Rabbit’s wonderful, humane appeal and Hutchison’s literary instincts, qualities which make this album a warm and wonderful companion.

Indeed, Hutchison comes across as akin to a charming and erudite barfly, full of hard-won wisdom and entertaining self-deprecation – the darkly comic closer The Oil Slick finds him once again taking pot shots at himself, musing that “I cannot talk about life and love/I’ve got a voice like a gutter in a toxic storm”. This lack of ego lends a refreshing air to an album which is self-assured, charismatic and quite simply brilliant. Pedestrian Verse should easily continue Frightened Rabbit’s upwards trajectory and, as with the characters who populate the album, you can’t help but root for their success.