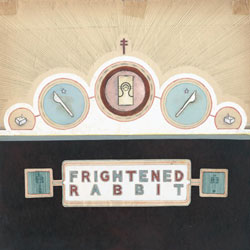 You had to have seen it coming: Frightened Rabbit, three albumsin, have refined their emotional, atmospheric songwriting style intosomething immeasurably huge, with eyes only for stadiums and perhaps,America.

2008’s The Midnight Organ Fight found critical acclaim on bothsides of the Atlantic, giving the Scottish five-piece a goldenopportunity that even the most well-grounded bands would finddifficult to ignore. It’s now no longer a totally far-fetched thoughtthat Frightened Rabbit are capable of becoming as big asColdplay or Snow Patrol currently are Stateside. Oneinclusion on a prime-time show’s famous closing scene and the restwill follow.

This might all make difficult reading for Frightened Rabbit fans who’ve been on side since debut Sing TheGreys. But remarkably, The Winter Of Mixed Drinks does nothing interms of isolating fans of old; songs keep to being dramatic and meaningful and Scott Hutchison’s unique, hot-blooded vocals are present and correct. In theory the group have bigger ambitions and willhave a healthier future on the back of this album, but they’re by nomeans a different band to the one that won so many hearts over thepast four years.

But let’s get to those anthems. Foot Shooter is the mostgoosebumps-inducing of all; a single guitar line, dripping with lengthand a blissful, ethereal softness, dominates the song. It’s a movingstudy of mortality, Hutchison declaring “If my face turns white, I amsorry, it’s not your fault, it’s mine” while the emotive sonic landscapekeeps to this touching lyric for the entirety of the song.

Lyrics are morbidly haunting throughout, just like theywere in the last record. Talk of “shovels”, “graves”, being “palerthan a pint box” and “sickness” all amounts to giving The Winter Of MixedDrinks a sense of being apart from the sappiness of some US-breaking output from south of the border.

Every track on this record has apowerful, hard-hitting meaning that hits the gut in aninstant. The concurrent theme is the symbolic idea of departure in newbeginnings found in the title and words of Swim Until You Can’t SeeLand and Skip The Youth. There’s a longing for escape, and it goeshand in hand with the joyful, hair-raising sounds of TheWrestle and Not Miserable, both of which display an emotion that’sstill a work in progress for the band: happiness.

This album will, at least in theory, open a new chapter in theband’s story, but the songs – as well as being significantly morestreamlined – manage to stir and move like neverbefore. Hearing The Winter Of Mixed Drinks is to hear Frightened Rabbit’s potential for becoming a bigger entity,sensationalising the States and playing arena venues, at least in towto another band. Perhaps none of these things will come to pass. Even if not, these Scotsmen will still be the band to make grown men sob into pints.